Peru to make contact with isolated tribe for first time 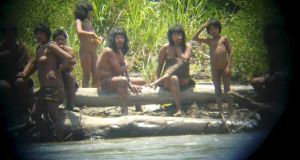 Members of the Mashco Piro tribe in Manu National Park. The Peruvian state will try to make contact with the isolated Amazonian tribe following an arrow attack on a village in May. Photograph: Reuters/Jean-Paul Van Belle

Peru will make contact for the first time with an Amazonian tribe that largely lives isolated in the jungle, part of a bid to ease tensions with nearby villages after a bow-and-arrow attack in May, authorities said.

Government anthropologists will talk with a clan of Mashco Piro indians to understand why they have been emerging from the forest, said deputy culture minister Patricia Balbuena.

In recent years the Mashco Piro have increasingly been spotted seeking machetes and food outside their jungle enclaves in the Manu National Park in southeastern Peru.

Villagers, Christian proselytizers and tourists have all interacted with the tribe, often giving them clothes and food. “The only ones who haven’t been in contact with them are representatives of the state!” said Ms Balbuena.

Peru prohibits contact with the Mashco Piro and another dozen “uncontacted” tribes mainly because their immune systems carry little resistance to common illnesses.

Authorities have said they cannot keep people from defying the contact ban because no penalty is attached.

Indigenous group FENAMAD warned that the decision to contact the Mashco Piro could legitimise the kind of unwanted interactions that have decimated isolated tribes in the past.

Luis Felipe Torres, the head of the state isolated tribes team, said the government would not forcibly contact the Mashco Piro or try to change their nomadic lifestyle.

“But we can no longer pretend they aren’t trying to make some sort of contact. They have a right to that too.”

However in the past year the Mashco Piro have appeared in populated areas more than 100 times, especially along the banks of a river where they gesture to passersby, said Ms Balbuena.

Not all interactions with outsiders have been peaceful. In May a group of Mashco Piro attacked the native Machiguenga community of Shipetiari, killing a young man with an arrow. In 2011 the Mashco Piro killed another local man and wounded a park ranger with arrows.

Using interpreters of Yine, a native language similar to the Mashco Piro tongue, the government hopes to prevent future clashes. Ms Balbuena said a team of doctors six hours upriver would treat the tribe if disease breaks out. – (Reuters)