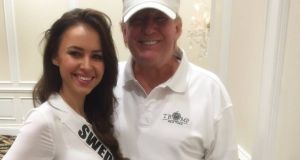 A Swedish model name-checked by Barack Obama as he mocked Donald Trump in his last Washington Correspondent’s Dinner speech has described the Republican frontrunner as “charismatic” but said she’d prefer to see Hillary Clinton win November’s race to the White House.

Addressing the cream of American journalism for the eighth and last time of his presidency on Saturday night, Mr Obama roasted all his would-be successors but saved his best lines of fire for “The Donald,” as he repeatedly called Mr Trump.

Dismissing claims that Mr Trump lacked the necessary international diplomacy skills to be the next US president, the current one pointed out that the Donald had “spent years meeting with leaders from around the world - Miss Sweden, Miss Argentina, Miss Azerbaijan”.

The mention of Miss Sweden prompted Camilla Hansson, a Miss Sweden who met Mr Trump after she entered the Miss Universe contest in 2015, to get in touch with The Irish Times.

She was most surprised by her mention at the Washington event but not in a bad way.

“It put a Sunday morning smile on my face,” she said. While she accepted that she was being gently teased in Mr Obama’s speech that she was still delighted “to have Sweden and its importance in the world mentioned in his last White House Correspondent’s speech as president. I understand it was derogatory but it was in the cause of humour.”

She said she was not remotely put out that Mr Obama “was being sarcastic about me and the other women’s importance. At the end of the day I was very proud to have been Miss Sweden. I got to travel around the world to support charity causes and continue to do so through my foundation.”

She met “The Donald” in January 2015 during the last Miss Universe competition held under the umbrella of Mr Trump’s business. He then sold the rights to better focus on his presidential ambitions.

“I talked to him during breakfast about various topics including real estate, as we have a common interest there, as well as my country Sweden and what his thoughts were. I found him very charismatic and a larger than life character like you would expect.”

When asked who she would like to be president she was impressively diplomatic: “Personally I am proud to see that there is a powerful female choice for the election this year as I like the idea of a strong woman in charge. But I will leave that for America to decide.”