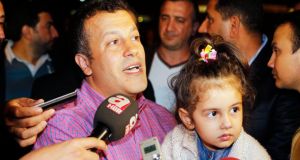 Late Saturday, a plane carrying the nine freed Lebanese captives arrived in Beirut from Istanbul while a plane from Beirut to Istanbul took the Turkish pilots home.

The swap was brokered and carried out by Lebanese, Turkish, Qatari and Palestinian officials, underlining the strong links between the warring parties in Syria and foreign powers, some of which have actively sought to influence the course of the war.

Some local reports said the Syrian government was expected to release a number of female prisoners as demanded by the rebels in exchange for the captives from Lebanon, which is home to Hezbollah, a Syrian ally. Some women were recently released, but it was unclear if that was part of the larger deal.

The full conclusion of the deal would be a rare bright spot in Syria’s civil war, which has left more than 100,000 people dead, sent millions of refugees streaming across international borders and exacerbated sectarian tensions across the Middle East.

On Saturday, more than 30 people were killed in intense fighting east of Damascus, about half of them soldiers killed by a suicide bomber.

Despite the success of the swap on Saturday, it appeared unlikely that the agreement, which involved only one of Syria’s hundreds of rebel groups and focused solely on the exchange of captives, could be expanded to open the possibility of talks aimed at ending the war itself.

In fact, the 17-month detention by Sunni rebels left some of the Lebanese captives, all of them Shiites, seeing the war in starkly sectarian terms. “The situation is worse than you think,” Abbas Shuaib, one of the released men, told television reporters after his return to Lebanon.

“If those people came to Beirut, they would consider our women free for the taking. This is war against the Shiites.” The rebels in Syria are mainly Sunni, and the president, Bashar Assad, is a member of the Alawite sect, an offshoot of Shiite Islam.

Other men who were interviewed said they had been held in cramped conditions and had often heard battles nearby, but that captors had never threatened their lives. Their return to Beirut set off a frenzy at the airport and celebrations in their neighbourhoods.

The head of Lebanon’s general security agency, Maj. Gen. Abbas Ibrahim, accompanied the men on their flight to Beirut and thanked Qatar, Turkey and Assad for facilitating the agreement. It was unclear what role Mr Assad may have played. The Lebanese and Turkish captives flew home aboard private Qatari jets.

In Turkey, prime minister Recep Tayyip Erdogan joined a crowd at the airport to welcome the released pilots. News of the impending swap had spread on Friday, when Lebanon’s interior minister said that the Lebanese captives who had been held for more than a year had crossed from northern Syria into Turkey.

The Syrian rebels had accused the men of belonging to the Lebanese militant group Hezbollah. Hezbollah officials and the captives’ families denied that, saying the men had been returning by bus from a pilgrimage to Iran. Eleven were originally held captive, but two were released months ago.

Then on Saturday, two Turkish Airlines pilots who had been kidnapped earlier this year by gunmen were given to Lebanese security officials, who flew them by helicopter to Beirut’s international airport.

It was widely believed the gunmen had captured the pilots in hopes of pressuring Turkey, which backs the Syrian rebels, to push for the Lebanese captives’ release. Late on Saturday, at roughly the same time, the two jets took off.

In Syria, fighting raged between rebels and the military for control of a Damascus suburb after a suicide bomber attack on a government checkpoint that an opposition monitoring group said killed at least 16 soldiers. After the attack, at least 15 rebel fighters were killed in heavy clashes as the government launched airstrikes and rebels peppered a government-controlled area with mortar rounds, according to the Syrian Observatory for Human Rights, which monitors the conflict from Britain through a network of contacts on the ground.

While clashes erupt daily between the ring of mostly rebel-held suburbs around the capital and the government-controlled core of the city, the death toll in Saturday’s battle was high, reflecting the rebels’ determination to advance toward downtown even as the government had reclaimed territory elsewhere.

The use of a suicide bomber to open a rebel offensive also shows the increasing sway of extremist groups in areas close to the capital.

While two affiliates of al-Qaida are active in Syria - the Nusra Front and the Islamic State in Iraq and Syria - they are most prominent in the country’s north and east, where they can easily transport arms and foreign fighters across the Turkish and Iraqi borders.

Recently, their presence has increased in central and southern Syria, although more mainstream rebel groups still outnumber them. The Syrian Observatory, which supports the opposition, said Saturday’s battle began when a suicide bomber from the Nusra Front blew up the car he was driving near a government checkpoint between the suburbs of Jaramana and Al Mleiha.