Government confirms the strike on a research centre at Jamraya 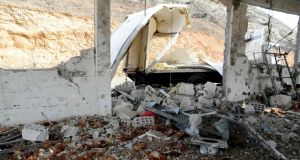 Damage is seen in a purported ammunition depot following an air strike near Damascus yesterday, in this handout photograph distributed by Syria’s national news agency SANA.

The people of Damascus were torn out of their sleep at 2am yesterday when Israeli rockets slammed into a scientific research centre at Jamraya, northwest of the Syrian capital. The government confirmed the strike on the Jamraya facility, but there were also reports that a strategic army base on Mount Qasioun, which dominates the city, was also hit.

Israel’s dramatic intervention prompted a day-long burst of blasts from shell and mortar, destroying the tranquillity of the Orthodox Christian Easter Sunday, a holiday for Syrians of all faiths.

Orthodox Christians George and Marya Jabbour live half way up a steep hill in West Mezze. Yesterday morning they were celebrating Easter at home with Sunni Muslim guests, refugees from Aleppo.

Over coffee and strawberry cake, Mr Jabbour, an academic and former adviser to Syrian president Bashar al-Assad’s father, said: “Israel is using the pretext of chemical weapons to attack Syria.”

He believes Syria may now be compelled to pull out of the May 1974 disengagement agreement from the Golan, which has kept the peace between Syria and Israel for almost 40 years and comes up for renewal in November. This would mean UN observers, deployed along the 1973 ceasefire line in the Golan, would be forced to leave, ratcheting up tensions in the region.

The call to noon prayer, issuing in fugal fashion from three mosques, was drowned out by a clash of explosions not far from the Jabbours’ flat. But by early afternoon the people of Damascus had recovered from the shock that Israel sought to embroil itself in their civil conflict, which has already drawn in other regional and international powers.

Children with ice-cream cones played on the grass in a park as their parents watched. Cafes filled up with customers eager to spend a few Syrian pounds on a coffee or a water pipe and discuss the morning’s development with friends.

They were not impressed by condemnation of the Israeli strikes by the Arab League and Egypt, which side with the rebels, or with Beirut’s appeal to the UN over the Israeli use of Lebanese airspace.