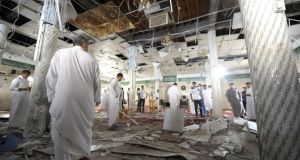 A suicide bomber killed 21 worshippers during Friday prayers in a packed Shia mosque in eastern Saudi Arabia, residents and the health minister said, in an attack claimed by the Islamic State militant group.

It was one of the deadliest assaults in recent years in the kingdom, where sectarian tensions have been frayed by nearly two months of Saudi-led air strikes on Shia Houthi rebels in neighbouring Yemen. More than 150 people were praying when the explosion ripped through the Imam Ali mosque in the village of al-Qadeeh, witnesses said.

A video posted online showed a hall filled with smoke and dust, with bloodied people moaning in pain as they lay on the floor littered with concrete and glass. More than 90 people were wounded, the Saudi health minister told state television. “We were doing the first part of the prayers when we heard the blast,” worshipper Kamal Jaafar Hassa said.

Islamic State said in a statement one of its suicide bombers identified as Abu ‘Ammar al-Najdi carried out the attack using an explosives-laden belt that killed or wounded 250 people, US-based monitoring group SITE said on its Twitter account. A photograph posted on social media showed the mutilated body of a young man, said to be the bomber.

The Saudi interior ministry described the attack as an act of terrorism and said it was carried out by “agents of sedition trying to target the kingdom’s national fabric”, according to a statement carried by state news agency SPA.

The agency quoted an interior ministry spokesman as saying that the bomber had detonated a suicide belt hidden under his clothes inside the mosque. “Security authorities will spare no effort in the pursuit of all those involved in this terrorist crime,” the official said in a statement carried by state news agency SPA.

In April, Saudi Arabia said it was on high alert for a possible attacks on oil installations or shopping malls.

In Beirut, Lebanon’s Hizbullah, an ally of Saudi Arabia’s regional rival Iran, condemned the attack but said authorities in the kingdom itself bore responsibility. “Hizbullah holds the Saudi authorities fully responsible for this ugly crime, for its embrace and sponsorship for these criminal murderers . . . to carry out similar crimes in other Arab and Muslim countries,” the Shia group said in a statement. – (Reuters)