More than one million children starve as Yemen war rages 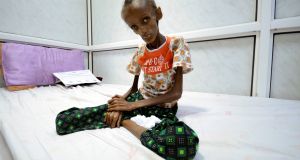 Saida Ahmad Baghili (18) who is affected by severe acute malnutrition, sits on a bed at the al-Thawra hospital in the Red Sea port city of Houdieda, Yemen. Photograph: Abduljabbar Zeyad/Reuters

Some 1.5 million children in Yemen are malnourished and half the population lives in hunger, United Nations aid agencies have warned.

Yemen’s 18-month war has left 370,000 children at risk of severe malnutrition - a condition which needs urgent treatment to prevent a child from dying - the UN children’s agency Unicef said at a press briefing in Geneva on Friday.

“It is really a dire situation on the ground. When you see mothers who have little to eat themselves and they see their children slipping away, it just breaks your heart,” said World Food Programme (WFP) spokeswoman Bettina Luescher at the briefing.

“It really is shocking and horrible to see this in the 21st century.”

Overall, almost half of all children in Yemen are stunted, according to WFP. Stunting is where children are short for their age, and is a sign of chronic malnutrition.

Ms Luescher said because of diminishing resources and increased needs the UN agency has had to split food aid into smaller rations to reach 6 million people every month.

Around 7 million Yemenis are “desperately in need of food”, she said, and the situation could worsen as the war rages.

Even before the conflict broke out, Yemen had one of the highest rates of malnutrition in the world, WFP said.

The agency said it needed $257 million (€234 million) to provide food aid until March next year.

These reports come after photographs emerged of a starving 18-year-old girl in a Yemeni hospital attracted worldwide attention.

The teenager is one of more than 13 million people, about half of Yemen’s population, who are short of food, with much of the country on the brink of famine, according to the United Nations.

Her picture is a reminder of the humanitarian crisis in the Arabian Peninsula’s poorest country where at least 10,000 people have been killed and millions displaced by fighting between the Saudi-led Arab coalition and the Iran-allied Houthi movement.

The humanitarian situation in Yemen has been compounded by a recent cholera outbreak, the World Health Organization said on Friday, with the number of suspected cases ballooning to 1,410 within three weeks of the outbreak being declared.