Up to 100,000 residents have fled but hundreds are still trapped in the Iraqi city 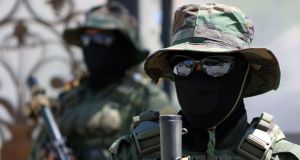 Iraqi fighters of the Shia militia Asaib Ahl al-Haq (The League of the Righteous) at their headquarters in the southern city of Basra. A spokesman for the force said militias were mobilised but are being held back by political resistance from the US-led coalition. Photograph: Haidar Mohammed Ali/AFP/Getty Images

Shia militias were mobilising to battle fighters from the Islamic State (IS) in the Iraqi city of Ramadi yesterday as hundreds of residents remained trapped by fighting.

Iraqi media said 3,000 members of the Shia militias known as the Hashad Shaabi had reached the Habbaniya military base outside Ramadi, the day after the jihadis took control of the city, which is only an hour’s drive from Baghdad.

But a spokesman for Asaib Ahl al-Haq, one of Iraq’s most powerful Shia forces, said the fighters had not yet been given permission to start operations. “We already sent out a general call-up and mobilised our elite forces last night,” said Naim al-Obodi, speaking by phone. “But unfortunately we have been stopped at the entrance of Anbar [province]. Our government will not allow us to go forward because it is dealing with political resistance, principally from the US-led coalition.”

He added that most of the main Shia militias were prepared to fight and were organising with local tribes for a three-pronged offensive.

It will also have symbolic resonance for Washington. During the US occupation, some of their costliest battles were fought to capture Fallujah and Ramadi, now both in IS hands.

After resisting the growing influence of the Shia militias for months, prime minister Haider al-Abadi on Sunday called for militia-affiliated volunteer forces to join the fight for the city. The governor of Anbar province also called for volunteer Shia militias to move into the mostly Sunni region, despite the fears of locals and the US-led coalition that their involvement could result in sectarian violence.

In the aftermath of Tikrit’s recapture, militias looted the city and summarily executed people in the streets. “We expect this will happen to Ramadi too. But what choice do we have?” asked one resident, who asked not to be named.

Officials say about 8,000 of the city’s residents have fled and 500 fighters and civilians have been killed in fighting in the past three days. Over the past month as many as 100,000 have left in the face of the IS advance, according to the UN.

Hundreds of locals remained trapped in the Khalidiya area outside the city yesterday and said that shelling had worsened in the area. They said the jihadis were trying to advance into the city towards the Habbaniya base. “And now lots of rockets are coming down in Khalidiya. People are trying to figure out where to move next,” said Abu Abbas, a Ramadi resident who had fled to the city’s outskirts, speaking by phone. “Our people were abandoned by their government and are stranded in the streets,” he said.

“The Isis [IS] advances in Anbar could have been avoided if they supported the tribes,” said tribal sheikh Bulaisim al-Gaoud. “Tribes are the ones who helped push out al-Qaeda in 2006 when the US occupied Iraq. But there is no trust left between Shia and Sunnis to do this now.” – Copyright The Financial Times Limited 2015