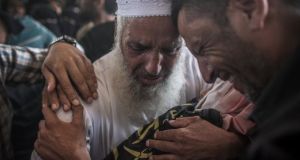 Relatives hold the body of a four-year-old girl during her funeral outside Rafah, in the southern Gaza Strip. She was killed along with her father and uncle during an overnight drone strike. Photograph: Oliver Weiken/EPA

Israel resumed its bombing campaign against Gaza yesterday afternoon after holding fire for six hours, adhering to an Egyptian ceasefire declared for 9am yesterday.

Prime minister Binyamin Netanyahu ordered the military to “act with intensity against terror targets in Gaza” after more than 50 projectiles landed in Israel during the truce period. “Hamas will pay the price for its decision to continue this campaign. When there is no ceasefire, our response is fire.”

Mr Netanyahu said the Hamas rejection of the ceasefire gave Israel full legitimacy to expand its offensive. “No country would sit idly by while its civilian population is subjected to terrorist rocket fire. Israel is no exception.”

The Israeli security cabinet endorsed the Egyptian truce yesterday even though it was clear Hamas had rejected the proposals, angry that they had not been consulted by the Egyptians. The armed wing of Hamas rejected the initiative as “surrender”.

One of the two Israeli ministers who voted against accepting the truce was foreign minister Avigdor Lieberman, who, in an unprecedented attack on a prime minister’s policy during a time of war, said the military campaign should end with Israel in full control of the Gaza Strip. “There is no other way to act other than have the army in full control of the Gaza Strip and the international community must give its full support to do what it takes,” he said.

“In the wake of the flagrant violation by Hamas of the Egyptian ceasefire initiative, I think that we need to come to a clear and sharp decision. We cannot suffer and hesitate. We must show determination. We must go all the way and there is no other alternative.”

Other right-wing politicians, including many from Mr Netanyahu’s Likud party, joined the backlash, openly criticising Israel’s acceptance of the ceasefire and the failure to launch a ground offensive.

Last night Mr Netanyahu fired one of his most vocal opponents from within the Likud, deputy defence minister Danny Danon, who has been extremely critical of Israel’s relative restraint and has called for a ground offensive to topple the Hamas regime.

With the death toll in Gaza approaching 200, the United Nations aid agency Unrwa described the damage wrought by Israel’s air offensive on Gaza as “immense”, with 560 homes razed.

Last night saw the first Israeli fatality of “Operation Protective Edge”, now in its ninth day. The man died after being hit by mortar fire close to the Erez crossing to Gaza.

US secretary of state John Kerry condemned Hamas for continuing the violence after Israel had accepted the Egyptian truce. He said the international community strongly supported the need for a ceasefire, as there was “the potential of an even greater escalation of violence”.

“We don’t want to see that, nobody does. But Israel has the right to defend itself,” he said.