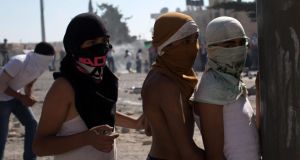 Israel has boosted its forces along the Gaza border, with officials sending out a message that Israel would only be able to sustain militant rocket fire for another 24, or maximum 48, hours before undertaking a major military offensive.

The security cabinet convened last night – for the fourth consecutive day – to consider Israel’s response as artillery pieces and tanks took up positions along the border.

“The main issue is how Hamas is reading the situation. We don’t want to take it further, but we will be prepared for developments.”

Forty militant projectiles landed in southern Israel in a 24-hour period, damaging a number of buildings in Sderot, the closest Israeli town to the Gaza border. One rocket slammed into a building being used as a summer kindergarten and only the quick thinking of the teacher who rushed the children into the bomb shelter prevented significant casualties.

The escalation in the south followed Wednesday’s killing of a 16-year-old Palestinian youth in Jerusalem, which sparked off fierce rioting by Palestinians who believe the boy was killed by Jewish extremists in revenge for the deaths of three Israeli students.

Israeli and Palestinian doctors yesterday carried out an autopsy on the boy’s body but police said it was still too early to determine if the killers were Jews or the murder was criminally motivated.

Rioting resumed in some Palestinian neighbourhoods in Jerusalem yesterday but not on the same scale as Wednesday’s clashes. Israeli police and troops were ordered to do everything possible to keep a low profile for the first Friday of the holy month of Ramadan.

Sderot mayor Alon Davidi urged the government to attack Gaza. “The rockets are designed to murder children. We have to launch another offensive to eradicate terror.”

Last night dozens of Sderot residents protested at the entrance to the town chanting “Bibi wake up – Jewish blood is not cheap” and “Let the IDF [Israel Defence Forces] win.”

The former head of the Israel security agency, Avi Dichter, warned that it could take a long time to root out terror from Gaza. “This is a long operation, which can take a year or more, and we should time it carefully according to military needs and political conditions. We must act from our brain, not our gut.”

The Hamas military wing remained defiant, threatening Israel with more rockets in a Gaza news conference last night. “Any foolish move the Israeli leadership makes will put Israeli towns in the range of our rockets. We will strike new targets,” an Izzadin al-Qassam spokesman said.