Turkish police have fired two tear gas canisters at a vehicle carrying a BBC reporting team as it was leaving the border area near Kobane, Syria. Video: BBC 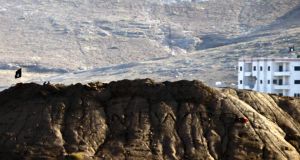 A picture taken from Turkey shows Islamic State (IS) flags displayed by militants in the east of Syrian Kobani city, at the Syria-Turkey border near Sanliurfa. Photograph: EPA/SEDAT SUNA 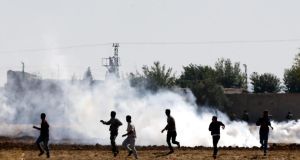 Turkish Gendarmerie use tear gas to disperse Kurdish protesters during a demonstration against Islamic State at the Syria-Turkey border near Sanliurfa today. Photograph: Sedat Suna/EPA 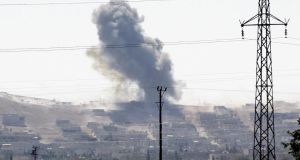 Islamic State (IS) had earlier raised its black flag over a building in the outskirts and forced thousands more of Kobani’s mainly Kurdish inhabitants to flee for their lives across the nearby border into Turkey.

Islamic State fighters had penetrated about 100 metres into the eastern part of the town, according to the Syrian Observatory for Human Rights, a British-based group which monitors the war through its sources on the ground.

“The battle has now become street fighting, it is happening inside the town, the eastern part of the town,” the Observatory’s Rami Abdelrahman said.

Islamic State wants to take Kobani to consolidate a dramatic sweep across northern Iraq and Syria, in the name of an absolutist version of Sunni Islam, that has sent shockwaves through the Middle East.

Strikes by American and Gulf state warplanes have failed to halt Islamic State’s advance on Kobani, which it has besieged from three sides and pounded with heavy artillery.

Forced to flee Kobani by the latest fighting, frightened residents crossed into Turkey through Yumurtalik, an improvised border crossing, and ambulances with blaring sirens shuttled back and forth between the Syrian town and Turkey.

“We can hear the sound of clashes on the street,” Parwer Ali Mohamed, a translator for the Kurdish Democratic Union Party (PYD), told Reuters by phone as he fled.

“More than 2,000 people including women and children are being evacuated. Turkish police are checking our luggage now,” Mr Ali said.

A black flag belonging to Islamic State was visible from across the Turkish border atop a four-storey building close to the scene of some of the fiercest clashes in recent days.

Mortars have rained down on residential areas of Kobani, and stray fire has hit Turkish territory frequently in recent days wounding people and damaging houses. Islamic State also fought intense battles over the weekend for control of Mistanour, a strategic hill overlooking Kobani.

A video released by the group on Sunday appeared to show its fighters in control of radio masts on the summit, but the footage could not be independently confirmed.

Turkey’s pro-Kurdish Peoples’ Democratic Party called for street demonstrations in Turkey to protest at Islamic State’s assault on Kobani, where the situation was “extremely critical”.

Militants also carried out two suicide attacks in the northeastern Syrian city of Hasakah, the Observatory said, killing at least 30 people. “The attacks targeted checkpoints run by Kurdish fighters on the western entrance of the city. They occurred within minutes of each other,” Abdelrahman said.

Until recently, Kobani had hardly been touched by the civil war that has ravaged much of Syria, and even offered a haven for refugees from fighting elsewhere, as president Bashar al-Assad chose to let the Kurdish population have virtual autonomy.

But beheadings, mass killings and torture have spread fear of Islamic State across the region, with villages emptying at its approach and an estimated 180,000 people fleeing into Turkey from the Kobani region.

On Sunday, a female Kurdish fighter blew herself up rather than be captured by Islamic State after running out of ammunition, local sources and a monitoring group reported.

Turkish hospitals have been treating a steady stream of wounded Kurdish fighters being brought across the frontier.

Witnesses who had fled Kobani said that old women were being given grenades to throw, and young women with no combat experience were being armed and sent into battle.

Kobani’s defenders vowed not to relinquish the town, raising fears of a massacre if Islamic State take control. “If they enter Kobani, it will be a graveyard for us and for them. We will not let them enter Kobani as long as we live,” Esmat al-Sheikh, head of the Kobani Defence Authority, said by telephone earlier today.

“We either win or die. We will resist to the end,” he added as heavy weapons fire echoed from the eastern side of town.

Speaking last week, the co-chair of the Kurdish Democratic Union Party (PYD) told Reuters that Islamic State had brought large parts of its arsenal from its de facto capital at Raqqa, 140 km to the southeast, to the assault on Kobani.

“If (Islamic State) is defeated here in Kobani, it will be defeated in Raqqa and throughout Syria,” Asya Abdullah said. “We are happy about the US air strikes. But really, this is not enough. We need more air strikes to be effective against (Islamic State) weapons, to eradicate and destroy (them).”

Today, Kurdish politicians confirmed that the PYD’s other co-chair, Saleh Muslim, had met Turkish officials to urge them to allow weapons into Kobani from Turkey.

Turkey has so far made no move to join the fight against Islamic State close to its borders, beyond returning fire at Islamic State fighters in response to mortar shells landing on Turkish territory.

Over the weekend, president Tayyip Erdogan vowed to retaliate if Islamic State attacked Turkish forces, and today Turkish tanks deployed along the border for the second time in a week, some with guns pointing towards Syria, apparently in response to stray fire.

Still, Islamic State’s release last month of 46 Turkish hostages, and a parliamentary motion last week allowing Turkish troops to cross into Syria and Iraq, have raised expectations that Ankara may be planning a more active role.

But Ankara is wary of helping Syrian Kurdish forces near Kobani as they have strong links with the PKK, which the Turkish state fought for three decades.