Islamic State and the battle for Iraq 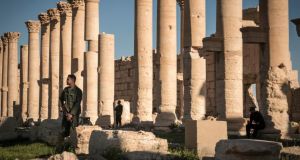 Syrian soldiers guard the Temple of Bel in Palmyra before its capture this week. Photograph: Sergey Ponomarev/New York Times 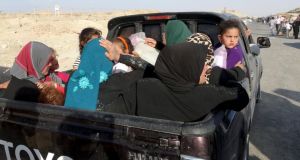 Sunni people flee the violence in the city of Ramadi. Photograph: Reuters 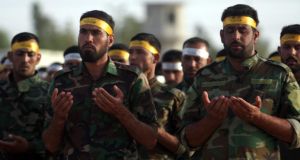 The seizure of the central Iraqi town of Ramadi by the forces of Islamic State raises crucial questions for the government of Iraq and the international community.

The jihadists’ advance, together with their capture, on Wednesday, of the ancient Syrian city of Palmyra, runs counter to the narrative of an organisation weakened by airstrikes and increasingly vulnerable to a counteroffensive by Iraqi government forces.

The taking of Ramadi in the face of efforts by the Iraqi army and others, including the US, which provided air support, underlines once more the resilience of Islamic State and the incapacity of Iraqi troops to resist or undo its advances in spite of the investment of billions of dollars in arms and training.

The town, which is about 100km from Baghdad, is on a key transit route to the capital from the borders of Syria and Jordan. Its fall follows last year’s capture of Mosul, Iraq’s second-most-important city, and Tikrit, which the government recaptured in late March.

The fall of Ramadi – indeed, the failure of the government in Baghdad to deal with the challenge of Islamic State – reflects the inability of successive governments since the US-led invasion of 2003 to offer Iraq’s Sunni Muslim minority, which makes up more than 30 per cent of the population, a real stake in the future of the country.

What followed was the marginalisation and disempowerment of the Sunni minority, the harassment and imprisonment of Sunni political leaders, and widespread sectarian violence. Sunni-majority areas, such as Mosul and Ramadi, were neglected by the central government.

This in turn has led some Sunni Iraqis to conclude that, although Islamic State may be little better than the domination and repression of Shia-led governments, it is certainly no worse.

This is not to say that all Sunnis support Islamic State. There is widespread recognition that, in the jihadists’ atrocities against minorities and non-Muslims, Sunnis have suffered more than most. Indeed, most observers have long accepted that the defeat of Islamic State depends on the participation of Sunni forces.

After careful negotiations, and with training and finance from the US military, which most Sunnis viewed at the time with almost as much hostility as al-Qaeda, Sunni forces succeeded in repelling al-Qaeda.

But a key difference between then and now was US support for Sunni forces fighting Islamist extremism. By the end of 2007 about 80,000 fighters had taken up arms against al-Qaeda in Iraq.

The situation today is very different. The replacement of the divisive Maliki by Haider al-Abadi has led to a shift in the rhetoric of the Baghdad government and acknowledgment of the need for greater political inclusion.

Nonetheless, although Sunnis do not seem him as sectarian in the way that Maliki was, Abadi is unlikely to embark on the radical restructuring of the Iraqi political system that would bring about the real power-sharing that Sunnis seek.

These concerns are exacerbated by the perception that Abadi is wary of arming Sunni forces that are willing to take on Islamic State.

In Washington DC earlier this month the governor of Nineveh province criticised Baghdad’s failure to provide arms for thousands of Sunni fighters who were anxious to join the long-awaited campaign to liberate the provincial capital, Mosul, from Islamic State control.

In the battle against the jihadists Abadi’s government in Baghdad has preferred to look to Shia militias backed by Iran rather than to seek Sunni support.

Relying on Shia forces is problematic, however, and likely to prove counterproductive.

Nationally, the defeat of Islamic States’ Sunni forces by Shia militias would deepen the sectarian divide that plagues Iraq. Sunnis, including the many who are hostile to the extremism of Islamic State, fear the recurrence of sectarian atrocities carried out in the past by Shia groups fighting on behalf of, but not controlled by, the government in Baghdad.

Regionally, reliance on Iran and Iranian-backed forces to defeat Islamic State will strengthen the reductive narrative of an underlying Shia-Sunni conflict that is being superimposed on conflicts across the Middle East. This is the case most notably in Syria and Yemen. This narrative ignores the local complexities of political life in the region, with the almost inevitable consequences of exacerbating and extending conflicts.

Internationally, the situation in Iraq poses further problems for western nations, especially the United States. Support for the strategy adopted by Baghdad, in which the role of Iran is crucial, seems to be drawing the US into a closer relationship with Tehran, much to the alarm of its long-standing ally Saudi Arabia.

The Saudis see themselves as leading Sunni resistance to the expansion of Shia influence in the region. They are deeply threatened by any rapprochement between Washington and Tehran.

The Saudi regime was alarmed by the United States’ failure, in 2011, to support the Egyptian president, Hosni Mubarak – a crucial ally of Saudi Arabia – or to take a more active role in the initial movement to dislodge the Iran-backed regime of Bashar al-Assad, in Syria. The Saudis now see the possibility of a successful conclusion of nuclear talks between the US and Iran as further proof of weakening US-Saudi ties.

The Obama administration’s implicit support for Baghdad’s reliance on Tehran to dislodge Islamic State from its Iraqi strongholds deepens the concerns of some in the new regime in Riyadh about the level of dependence on the US. Ray Tayekh of the US-based Council for Foreign Relations speculates that all of this may prompt Saudi Arabia to seek nuclear weapons to protect its interests.

As Iraq continues to unravel, the prospects for regional stability appear to be as elusive as ever.