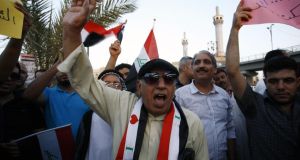 Several of Mr Abadi’s influential rivals will be stripped of official posts, including his predecessor Nuri al-Maliki, who will lose the job of vice president he has held since stepping down as prime minister last year after eight years in power.

A year in office, Mr Abadi had sought to transform a system which divvies posts to party leaders on ethnic and sectarian lines, which he says encouraged corruption, incompetence and political blackmail and was making the country ungovernable.

Under the sweeping reforms, the three positions of vice president and three deputy prime ministers will be scrapped, removing offices that had become vehicles for patronage for some of the most powerful people in the country.

Mr Abadi will be given the power to fire provincial governors and regional officials, who often wield more power in their territories than the central authorities.

Under the system put in place during the 2003-2011 US occupation, and designed to encourage an inclusive government, top positions were apportioned among the three main ethnic and sectarian groups: Shias, Sunnis and Kurds.

But Iraqi reformers have long argued this put too much power in the hands of ethno-sectarian party bosses, who occupy Baghdad offices, cruise its streets in armed convoys and staff their fiefs with loyalists.

“From a political standpoint, it is the first time [Abadi] has had an opportunity. If he can capitalise on this, it does put him in a position where he can, for the first time, develop an independent political base and political standing,” said Kirk Sowell, publisher of the Inside Iraq Politics newsletter.

The ayatollah, who wields more public authority than any politician, spoke following big protests in recent weeks triggered by public anger at power cuts and mismanagement of other services. His intervention makes it difficult for Mr Abadi’s rivals in the Shia majority – including Mr Maliki – to oppose the measures openly.

“We do not object to resorting to constitutional and political mechanisms in order to reconsider some of the legislation,” Mr Maliki said in a statement. Nevertheless, the politics and logistics of implementing the reforms could prove difficult. – (Reuters)