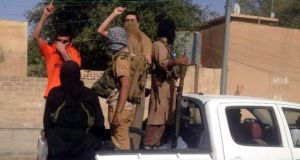 Sunni militants in Tikrit, northern Iraq. The extent of the Iraqi army’s defeat at the hands of militants from the Islamic State of Iraq and Syria (Isis) became clear on Wednesday (11JUNE) yesterday when officials in Baghdad conceded that insurgents had stripped the main army base in the northern city of Mosul of weapons, released hundreds of prisoners from the city’s jails and may have seized up to $480 million in banknotes from the city’s banks.

Iraq is facing its gravest test since the US-led invasion more than a decade ago, after its army capitulated to Islamist insurgents who have seized four cities and pillaged military bases and banks, in a lightning campaign which seems poised to fuel a cross-border insurgency endangering the entire region.

The extent of the Iraqi army’s defeat at the hands of militants from the Islamic State of Iraq and Syria (Isis) became clear yesterday when officials in Baghdad conceded that insurgents had stripped the main army base in the northern city of Mosul of weapons, released hundreds of prisoners from the city’s jails and may have seized up to $480 million in banknotes from the city’s banks.

Iraqi officials said two divisions of Iraqi soldiers – roughly 30,000 men – simply turned and ran in the face of the assault by an insurgent force of just 800 fighters. Isis extremists roamed freely yesterday through the streets of Mosul, openly surprised at the ease with which they had taken Iraq’s second largest city after three days of sporadic fighting.

The developments seriously undermine US claims to have established a unified and competent military after more than a decade of training. The US invasion and occupation cost Washington close to $1 trillion and the lives of more than 4,500 of its soldiers. It is thought to have killed at least 100,000 Iraqis.

In a day of extraordinary developments, Isis gunmen also encircled the city of Deir el-Zour across the border in Syria, kidnapped 80 Turkish citizens in two mass abductions, made advances in two other provinces and claimed to have successfully smuggled a huge weapons haul to eastern Syria’s Hassaka province.

Isis fighters rode unopposed into Saddam Hussein’s birthplace of Tikrit. There, as in Mosul the day before, they set up checkpoints, sacked government buildings and filled trucks with weapons and cash, some of which were dispatched to Syria.

Militants seized the Turkish consulate in Mosul and kidnapped the head of the diplomatic mission and 24 staff members. Turkish forces have targeted Isis forces in Syria.

At least half a million residents of northern Iraq are reported to be on the move, with most attempting to flee to the Kurdish far north where border officials were overwhelmed and expected refugee numbers to rise sharply in coming days.

The UN said it was scrambling to deal with the crisis. Save the Children said: “We are witnessing one of the largest and swiftest mass movements of people in the world in recent memory.” – (Guardian service)