Gaza protests across Ireland and the world 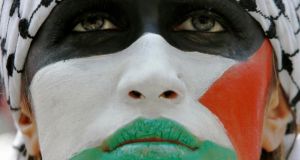 A demonstrator with face painted in the colours of the Palestinian flag protests outside the Israeli Embassy in west London today. Photograph: Luke MacGregor/Reuters 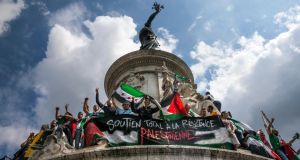 Protesters stand on the Statue de la Republique holding a poster in French reading ‘Total support for the Palestinian Resistance’ during a protest in support of Palestinians in Gaza, at Paris in France today. Photograph: Etienne Laurent/EPA 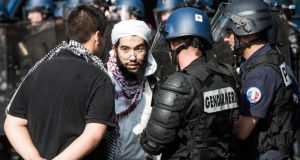 A protestor talks with riot police to try to calm the situation during clashes following a protest in support of Palestinians in Gaza, in Paris, France today. Photograph: Etienne Laurent/EPA 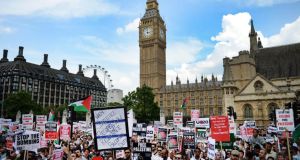 Thousands of people took to the street across Ireland today calling for an end to violence in Gaza.

A crowd of about 3000 marched from the Spire in O’ Connell Street, Dublin to the Israeli embassy.

Demonstrations were held in more than 16 locations across the country including Derry, Limerick, Cork, and Waterford.

Freda Hughes, spokeswoman for Ireland Palestine Solidarity Campaign who are hosting the protests, said Ireland’s decision to abstsain from a United Nations vote to investigate allegation of Israeli war crimes in Gaza was “shameful”.

“People across the globe are disgusted and appalled by what they are witnessing in Gaza,” she said.

“It is a war on the whole people of Gaza; men, women, children, hospitals, schools and neighbourhoods.”

Similar protests were echoed across Europe with more than 45,000 people showed up to protest against the conflict in London.

Pro-Palestinian protesters clashed with police in central Paris today when hundreds of marchers defied a ban by French authorities to rally against Israel’s offensive in the Gaza Strip.

French interior minister Bernard Cazeneuve warned organisers in a television address that they would be held responsible for any clashes and could be prosecuted for ignoring a ban that was confirmed by the country’s top administrative court.

Good turnout in Dublin for #Gaza and #Palestine. Death toll topped 1000 while we were marching pic.twitter.com/HIRZDiwIVY

Thousands at #Belfast march hear the call for unity of Israelis and Palestinians against the slaughter in #Gaza pic.twitter.com/fEaJR9Fd7j

French authorities have refused to permit several pro-Palestinian protests because they feared violence.

Marchers clashed with riot police in and around Paris in recent weeks, with some targeting synagogues and Jewish shops.

“Anti-Semitic violence exists: we must face it head on,” Mr Cazeneuve said.

Some protesters, NGOs and even ruling Socialist politicians have criticised the bans on the rallies as counter-productive.

Mr Cazeneuve noted that over the last two weeks, five marches had been banned, out of about 300 such protests across the country.

“Freedom of protest was thus the rule, and bans the exception,” he said.

According to the interior ministry, some 2,000 police were sent to the Place de la Republique to surround the demonstrators, which Reuters photographers estimated numbered between 800 and 900.

The photographers saw one police officer slightly injured, the front windows of the Crowne Plaza hotel smashed and a bus shelter wrecked.

“Our goal is not to attack the Jews, it is to condemn the policies of a government,” Tarek Ben Hiba, a local politician and head of one of the 20 associations organising the protest said.

At least one Israeli flag was burned, a Reuters photographer said.

In the Mediterranean port city of Marseilles, some 2,000 people marched peacefully today in an authorised demonstration.

France has both the largest Jewish and Muslim populations in Europe and flare-ups in the Middle East have often in the past added to tensions between the two communities.

Israel began its offensive earlier this month, citing a surge in rocket attacks launched from Hamas militants in Gaza.

The Palestinian death toll in the Gaza Strip on Saturday climbed to 1,000, most of them civilians. Thirty-five Israeli soldiers and three civilians have also died.