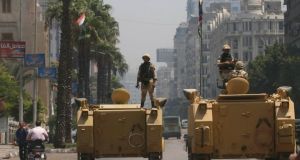 A soldier holds his weapon as he stands on an armoured personnel carrier positioned outside the state-run television station in Cairo. The military shut down all the Egyptian television networks that supported president Mohamed Morsi on the night he was ousted from office. Photograph: Louafi Larbi/Reuters

Amid an international outcry over a bloody crackdown, the new government named by Gen Abdel-Fattah el-Sissi is putting concerted pressure on the only remaining news outlets in Egypt covering criticism of the violence: the foreign press.

The military had already shut down all the Egyptian television networks that supported president Mohamed Morsi on the night the general ousted him. Now, in the past four days, the new authorities have raided and shut down the offices of the pan-Arab Al-Jazeera network, taken steps to deny its Egyptian licence and, on Sunday, arrested its correspondent Abdullah El-Shamy on charges of inciting murder and sectarian violence.

Al-Jazeera, based in Qatar, was the only big Arabic-language network considered sympathetic to the Muslim Brotherhood.

Senior government officials, meanwhile, publicly scolded western correspondents in two news conferences and a public statement for failing to portray the crackdown in the government’s terms: as a war against violent terrorists.

Unappreciated
On Sunday, even Gen el-Sissi joined the chorus, criticising foreign news media for failing to appreciate his mandate to fight terrorism.

The criticisms echoed incessantly through the state and private media and, in an apparent response, vigilante supporters of Gen el-Sissi have attacked or detained at least a dozen foreign journalists, the vast majority on the same day that an adviser to the president delivered the first diatribe against western news coverage.

“One could be forgiven for saying that there is a co-ordinated campaign against the foreign journalists,” Matt Bradley, a reporter for the Wall Street Journal, said in an interview with Al-Jazeera’s English-language sister network.

He described being pulled into an armoured personnel carrier by soldiers rescuing him after a mob tackled him, tore at his clothes and took his notebook.

Coming at the end of a week when security forces killed more than 1,000 Morsi supporters in the streets, the push to control how the news media portrays the violence is the latest sign of the government’s authoritarian turn, which its officials have justified as emergency measures to save Egypt from a co-ordinated campaign of violence by the Islamists of the Muslim Brotherhood.

Scholars and human rights activists say they see signs of broad co-ordination between Egypt’s state and private media to drive home the same messages. After the first mass shooting following the military takeover killed more than 60 Morsi supporters at a sit-in, for example, television talkshows across the state and private media seemed to suggest that the Islamists might have deliberately provoked the violence to tarnish the military.

Later, all seemed to discover that even British prime minister David Cameron had argued for limiting human rights in the interest of protecting national security. “There is very clear co-ordination,” said Heba Morayef, a researcher in Egypt for Human Rights Watch. “Forgetting what is true or not, it is interesting that you hear the same thing from everybody.”

Prominent human rights activists whose criticism of the former government made them a staple of Egypt’s nightly talkshows for the past two years say their invitations have dried up as they have continued to criticise the police’s disproportionate violence since Gen el-Sissi’s takeover on July 3rd.

Sudden unanimity
The scholars say the sudden pro-government unanimity of the Egyptian news media, following the cacophonous explosion of news media freedom after the ousting of president Hosni Mubarak two years ago, is a throwback not just to the Mubarak era but much further back – to the pre-satellite era when the government ran all Egyptian media. Some said the chorus of criticisms of the Islamists as “terrorists” – relatively seldom heard here until July – recalled the years of the early 1950s, when Col Gamal Abdel Nasser consolidated his power by cracking down on the Muslim Brotherhood.

Even some of the headlines were almost the same, said Prof Mona el-Ghobashy, a political scientist at Barnard College.

She noted a pattern of “dehumanising” the Islamists across the state and private media that began shortly after Gen el-Sissi removed Mr Morsi.

The core of the government’s complaint with western media coverage is what it considers an excessive focus on the hundreds of Morsi supporters killed by police violence and an insufficient attention to the acts of violence by Morsi supporters. But there remains no evidence that the Brotherhood has systematically plotted violence or that the sit-ins posed a threat to other civilians.
– (New York Times service)