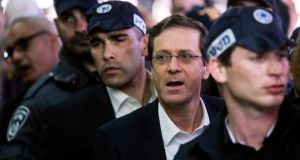 Isaac Herzog, co-leader of the centre-left Zionist Union, during a campaign stop at a fruit and vegetable market in Tel Aviv on Thursday. Polls suggest the Israeli electorate is getting used to the idea of him as prime minister. Photograph: Baz Ratner/Reuters

With four days to go before the Israeli election, polls continue to show the centre-left Zionist Union maintaining a three- to four-seat lead over prime minister Binyamin Netanyahu’s Likud party, although Mr Netanyahu is likely to receive more recommendations to serve as prime minister.

Under the Israeli system the president decides who to charge with forming a new government after he hears the recommendations of the leaders of all the parties elected to the new Knesset.

In the event of no one candidate receiving the support of an overall majority of 61 of the 120 Knesset members – a likely scenario after next Tuesday’s vote – the president is likely to choose the leader of the biggest party, particularly if there is a significant gap between the leading and second-placed party.

President Reuven Rivlin may well recommend, in the interests of political stability, a national union government including the Zionist Union and Likud, with the two leaders rotating the premiership.

A similar arrangement followed the tie in the 1988 elections when Likud’s Yitzhak Shamir and Labor’s Shimon Peres agreed to a national unity government, with Mr Shamir serving as prime minister for the first two years, followed by Mr Peres.

Mr Netanyahu has repeatedly rejected the idea of a national unity government but this could well change once the election campaign is over.

Mr Peres, who served as president prior to Mr Rivlin, yesterday endorsed Yitzhak Herzog for prime minister, hailing him as a “level-headed leader who is reliable and full of responsibility and dedication to the Israeli public”.

“He is the architect of the Oslo peace accords, an enthusiastic supporter of the disengagement, and a proponent of withdrawal from the West Bank.”

Although the polls show that most Israelis still consider Mr Netanyahu the most suitable candidate for prime minister, Mr Herzog is closing the gap, and the recent rise in support for the Zionist Union indicates that the electorate may be getting used to the idea that Mr Herzog can replace Mr Netanyahu.

In an effort to stem the tide, Mr Netanyahu is trying desperately to shore up support on the right and woo back disillusioned Likud voters who are supporting smaller right-wing or centrist alternatives.

“The only way to ensure that the next government is headed by the national camp is to vote for Likud,” he said, warning of “a real danger” of the left returning to power supported by the new United Arab List, which is projected to win 13 seats.

Holding the balance of power may well be the new Kulanu centrist party headed by Moshe Kahlon, who served as communications minister in the 2009 Netanyahu government.

He was a popular Likud minister who pushed through the deregulation of the Israeli cellular phone market, significantly cutting mobile phone charges. However, like many politicians, he fell out with Mr Netanyahu, and set up Kulanu (“All of Us” in Hebrew), dedicated to cutting the cost of living.

Mr Kahlon has made clear his desire to serve as finance minister in the next government but has refused to say who he will recommend for prime minister.