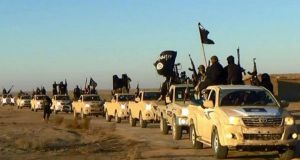 At least 40 Islamic State fighters have been killed in an air strike on their convoy in the Syrian province of Hama, a UK-based monitoring group reported on Sunday.

The attack, which took place on Saturday, also destroyed 16 vehicles in the convoy, said the Syrian Observatory for Human Rights, which monitors violence in the country through a wide network of sources on the ground.

The observatory added that the convoy had just left Raqqa, the de facto capital of the militant group, at the time of the attack. No further details were immediately available. – (Reuters)