Three others wounded after device explodes beneath vehicle 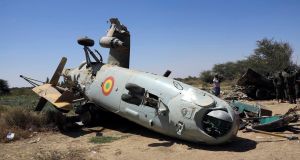 A fifth French soldier has been killed in the country's nine-week-old military campaign against Islamist rebels in Mali, the government said today.

An explosive device went off under a vehicle carrying Corporal Alexandre Van Dooren during a search for rebel arms caches in northern Mali's Ifoghas mountains yesterday, according to France's defence ministry and the president's office.

The 24-year-old from the 1st Marine infantry regiment of Angouleme was killed and three other soldiers wounded, the government added.

France launched a ground and air operation in January to break the Islamist rebels' hold on the region, saying the militants posed a risk to the security of West Africa and Europe.

The offensive has wrested northern Mali from Islamist occupation and killed scores of fighters. Other rebels have retreated into mountain caves and desert hiding places stocked with arms and supplies.

President Francois Hollande issued a statement saying the military operation was at its "final, most delicate stage".

The United Nations is considering setting up a 10,000-strong force in the former French colony before presidential and legislative elections in July, a deadline a European diplomat described on Tuesday as "a race against time".