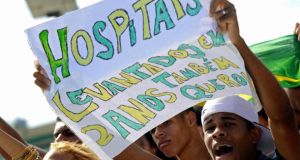 Demonstrators hold a protest in Salvador with a sign reading, “We want hospitals built in two years too,” in reference to the time it took to build the stadiums for the Confederations Cup. photograph: Valter Pontes/Reuters

After a disastrous two weeks during which massive street protests overshadowed the Confederations Cup, football’s world governing body Fifa and Brazil’s government face an anxious 11-month wait to see if the unrest will reignite come next June’s World Cup.

The suddenness with which the leaderless movement emerged and the speed with which demonstrators focused their anger on preparations for Fifa’s marquee event means any relief organisers drew from the Confederations Cup final will be fleeting.

Unlike in previous games there were more Brazilians inside the stadium on Sunday night cheering on the national team than out on the streets protesting against Fifa’s presence in the country.

The surprisingly comprehensive 3-0 victory over world champions Spain pushed the trouble between police and the few marchers that did attempt to reach the Maracanã stadium off the front pages.

Spending pledge
But while the demonstrations have now diminished in size, Fifa and the government have been left shocked at how citizens in the self-proclaimed “country of football” turned on preparations for the World Cup during the rallies.

In a bid to prevent a repeat, Brazil’s government is promising tens of billions of euro in extra spending on public services, another source of ire.

However, deeply entrenched practices that mix mismanagement with corruption are as big an obstacle to better public services as a lack of funding. Analysts warn more cash may not be enough to resolve the endemic crises in health, education and transport before the country’s gaze is once again drawn to the sparkling new stadiums taxpayers are now on the hook for.

“It is unlikely much will have changed by next year so there is a real likelihood the protests could start up again, especially as the world’s media will be here,” says David Fleischer, politics professor at the University of Brasília.

“And reinforcing that likelihood is the fact that we will be in the middle of a presidential election campaign when many groups will have an interest in stirring up unrest.”

Model under threat
For Fifa such a popular insurrection threatens its economic model of getting countries to pay to host the World Cup from which it then takes most of the profits.

Sponsorship deals for next year’s event are already tied up but more protests could damage its World Cup brand.

Seeking to remove itself from the line of fire, the organisation has pledged to give $100 million (€77 million) in profits back to Brazil to establish a “social fund”.

But its critics point out that Fifa will make a profit of more than €1 billion from the tournament, on which it will pay no tax.