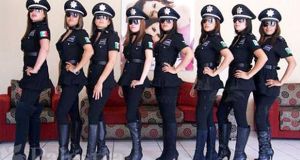 Women police in the Mexican city of Queretaro have filed complaints that male commanders subjected them to “attractiveness” inspections as part of the selection process for a new unit in the touristic town centre.

Two officers have complained to the state’s human rights commission, said Maricruz Ocampo, of Coincidir Mujeres, an NGO which is supporting the women.

The allegations emerged as police in the city went on strike this week, demanding the resignation of chief Rolando Eugenio Hidalgo Eddy.

Ms Ocampo said that young women officers were singled out for an inspection at which their male superiors commented on their appearance and weight – telling one woman who had been pregnant but had lost her child that she was “paunchy”.

“The women said, ‘I trained to be a police officer, not a showgirl.’” said Ms Ocampo.

The allegations come as the country confronts a spate of sexual violence, which has drawn outrage on social media and society at large, but also a backlash of misogynistic comments and threats .

According to security analyst Alejandro Hope, the local police force in Queretaro – a prosperous manufacturing hub 220km north of Mexico – had previously performed better than most others in the country, with better funding and external oversight.

Mr Hidalgo Eddy had previously held a similar job in the state of Aguascalientes, where he formed a unit of attractive women officers, who went about their duties wearing high-heeled boots, tight clothes and lots of lipstick.

The scheme won national attention in 2013 when the women appeared in a photo with president Enrique Pena Nieto. Analysts say it made no impact on security and the state abandoned the project last month.

“It is definitely discriminatory, and there’s no evidence that by hiring ‘attractive women’ they will do a better job than anyone else” said Jorge Kawas, a security analyst in the city of Monterrey.

But the stunt has been copied across the country. Acapulco recently started a tourist police force of attractive, young, women officers.

Ms Ocampo also expressed concerns the force has reduced staff in its division responsible for responding to women and children and moved women officers out of the central part of the city. A surge of sexual harassment allegations has also surged within the police, she says.

“What we’re worried about,” Ms Ocampo says, “Is that the human rights violations inside the force are going to eventually move toward the public”.

A spokesman for Queretaro police denied in a statement that there were plans to form a special female unit. He did not comment on the harassment allegations, saying the department would wait for the human rights commission investigation.