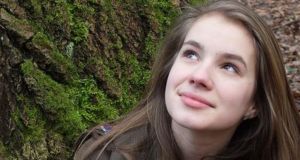 Maria Ladenburger: the student was raped and killed in October – she was last seen cycling home. Photograph: Facebook

Germany’s far-right Alternative für Deutschland (AfD) party has been accused of using the rape and killing of a 19-year-old woman to stir up fears about refugees.

Seven weeks after the brutal killing of Maria Ladenburger shocked the city of Freiburg in Germany’s southwest, police have questioned, as chief suspect, a 17-year-old Afghan asylum seeker who came to the country last year.

The victim, a 19-year-old medical student, was found dead on the banks of the Dreisam river on October 16th. She was last seen cycling home from a party the previous evening. An autopsy found that she had been raped and drowned.

After weeks of investigations, police announced they had taken into custody a suspect based on DNA and security camera evidence. News that the suspect is a so-called unaccompanied minor from Afghanistan – and that the victim worked in a local refugee home – has prompted a fresh round of soul-searching in Germany over its open-door approach last year to arrivals from Syria and other crisis countries.

In a press release, the AfD said the “bitter irony” of the chief suspect, and the victim’s refugee engagement, exposed the failings of chancellor Angela Merkel’s refugee strategy. It also attacked AfD critics who dismissed as “populist” the party’s warnings about uncontrolled inward migration of “hundreds of thousands of young men from patriarchal-Islamist” circles.

“The ignorance in light of these warnings amounts to a mix of naivety and arrogance,” said Jörg Meuthen, AfD co-leader, echoing a furious reaction on social media towards the chief suspect.

But the AfD’s response prompted a strong counter-reaction on Monday, with Social Democrat Party (SPD) chairman Sigmar Gabriel accusing the AfD of taking advantage of a terrible crime for “incitement and conspiracy propaganda”.

“It’s clear to everyone that refuges can carry out just as horrific crimes as people born in Germany,” said Mr Gabriel.

Almost a year after hundreds of attacks on women celebrating New Year’s eve in Cologne, with many migrant perpetrators, German police union chief Rainer Wendt said that the Freiburg killing and others could have been avoided if Germany “had been prepared for the dangers that mass immigration always bring”.

His remarks were attacked as “politically repulsive and dumber than what police should allow” by deputy SPD leader Ralf Stegner on Twitter.

The family of Ms Ladenburger have not commented on the killing, but sent their own signal in a newspaper death notice, asking that, instead of flowers, donations be made to a local refugee association.