Blogger and activist found guilty of stealing from timber firm 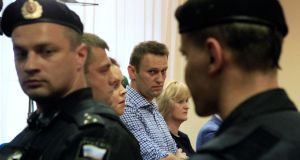 Russian protest leader Alexei Navalny (centre) stands yesterday inside a courtroom in Kirov where he was sentenced to five years in jail for theft. Photograph: Reuters/Sergei Karpukhin

The European Union and United States have led sweeping condemnation of the jailing of Alexei Navalny, a Russian opposition leader and fierce critic of president Vladimir Putin.

A court in the city of Kirov yesterday sentenced Mr Navalny to five years in jail, for organising the theft of 16 million roubles (€377,000) of timber from a local firm when he served as an adviser to the governor of the Kirov region in 2009. Co-defendant Pyotr Ofitserov was given a four-year sentence.

Supporters of Mr Navalny had expected him to be found guilty, in what they called a show trial intended to scare Mr Putin’s opponents into silence and prevent the anti-corruption activist from running in September’s Moscow mayoral election and presidential elections in 2018.

But they had hoped he would receive only a suspended sentence, and were shocked by the decision of judge Sergei Blinov. “This outcome, given the procedural shortcomings, raises serious questions as to the state of the rule of law in Russia, ” said the EU’s foreign policy chief Catherine Ashton.

Michael McFaul, the US ambassador to Moscow, wrote on Twitter: “We are deeply disappointed in the conviction of @Navalny and the apparent political motivations in this trial.”

Denounced
European capitals denounced the verdict against Mr Navalny, who in late 2011 and early 2012 led the biggest rallies against Mr Putin since he took power in 2000, bringing tens of thousands of people on to the streets of Moscow in protest at corruption and alleged election fraud.

A spokesman for German chancellor Angela Merkel said the verdict was “disproportionate”, while Andreas Schockenhoff, the German government’s co-ordinator on Russian relations, decried a “show trial” that “stands for policies that tolerate no forms of opposition or political competition”.

“There are acquittals in 1 per cent of Russian court cases but in a political trial there has never been an acquittal,” Mr Schockenhoff added.

Britain and France also criticised the ruling, which hinged on evidence given by prosecution witness Vyacheslav Opalev, the former director of the Kirov timber firm who was given a suspended sentence last year after pleading guilty to conspiring with Mr Navalny.

When Mr Navalny was advising the Kirov governor, he recommended that Mr Opalev be sacked and a corruption investigation opened into his running of the company; he says Mr Opalev testified against him now out of a desire for revenge.

None of the other former company officials who testified said that Mr Navalny had defrauded the firm. When the verdict was read out, Mr Navalny (37) hugged his mother and wife Yulia – with whom he has two children – shook his father’s hand and gave them his watch and telephone. Then he was led away in handcuffs.

The sharp-tongued Mr Navalny has used the internet and social media to rail against Mr Putin, dubbing him a “toad” grown fat on Russia’s oil money and giving his allies a nickname that is now well known in Russia – “the party of crooks and thieves”. “OK. Don’t get bored without me,” Mr Navalny wrote in a final Twitter message.

‘Fabricated’
“But the most important thing is to not sit idle; a toad won’t jump off the oil pipes by itself.”

Boris Nemtsov, a former cabinet minister and opposition activist, said the case was “completely fabricated from start to finish . . . With today’s ruling, Putin has told the whole world he is a dictator who sends his political opponents to prison.”

The last Soviet leader, Mikhail Gorbachev, said: “using courts to fight political opponents is unacceptable . . . unfortunately [this] confirms we do not have independent courts.”

Last night a few thousand people were gathering in central Moscow and Saint Petersburg to protest against the verdict. Riot police were out in force in both cities. Mr Navalny’s imprisonment robs Russia’s beleaguered and fractious opposition movement of its most charismatic and authoritative leader.