War crimes case against Israel over Gaza may never get started 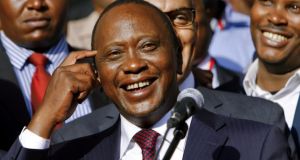 Still smarting from the collapse of the case against Kenyan president Uhuru Kenyatta, and the suspension of its Darfur investigation, the International Criminal Court (ICC) now finds itself thrust into a bitter confrontation between Israel and the Palestinians, likely to focus first on alleged crimes during last year’s Gaza war.

It emerged yesterday that as well as acceding to the Rome Statute, which established the ICC, the Palestinian Authority has also lodged a fast-track “ad-hoc declaration” accepting the court’s jurisdiction and allowing it to investigate crimes as of June 13th last, the day that conflict in Gaza began.

The decision to adopt this twin-track approach indicates that the Palestinian Authority is anxious to avoid procedural delays, although, in acknowledging receipt of its documents, the court warned that “acceptance of the ICC’s jurisdiction does not automatically trigger an investigation”.

The date of June 13th had been chosen, said Shawan Jabarin, director of the human rights group Al-Haq, because ICC investigations typically need “a very specific geographical location and timeframe” and because that date had also been taken as its starting point by a parallel UN commission of inquiry.

Jabarin said he believed the twin-track approach was aimed at preparing the legal ground for the Palestinian Authority to file a suit against Israel early in April, alleging war crimes during the seven-week conflict that left nearly 2,200 Palestinians and 73 Israelis dead.

The problem facing Palestinian Authority president Mahmoud Abbas is that acceding to the Rome Statute, and achieving justice through the lengthy and arguably flawed procedures of the ICC, could turn out to be two very different things.

Under ICC rules, signatories must wait 60 days before filing cases, hence the anticipated date of early April for the Gaza suit. But even then there is no certainty. The decision on whether or not to launch an investigation will be taken by the ICC prosecutor Fatou Bensouda, having examined the merits of the case.

Law professor Eugene Kontorovich says: “The ICC has proven itself completely incapable of prosecuting a case against an unwilling regime, especially an authoritarian or illiberal one . . .The Kenyatta case has created a playbook for countries wanting to frustrate ICC proceedings.”

Even if Bensouda was to begin an investigation, she would then have to decide whether its findings should lead to indictments against named individuals – as distinct from the Israeli state or the Israel Defence Forces – which might plausibly lead to convictions before judges.

Again, even if she were to indicate a willingness to investigate and follow the results where they led, the UN Security Council has the power to prevent any ICC investigation – and the combined lobbying lower of the US and Israel could prove difficult to resist.

But most politically complex – not to mention potentially explosive – of all is the possibility that the ICC may have to rule on whether or not Palestine is legally a state, because only sovereign states can join the ICC.

If Palestine is not a state, then it cannot join. If it is a state, then, before proceeding with any investigation, there will be the task of defining its territory, one of the most intractable issues at the core of the conflict between Israel and Palestine. Such a case, says Leiden law professor Carsten Stahn, “could take close to a decade, at least”.