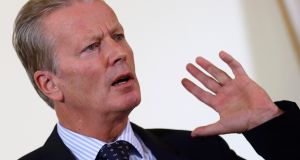 Europe’s refugee crisis has begun to weigh on Vienna’s ruling coalition government, which is struggling with the rise and rise of the far-right opposition Freedom Party (FPÖ).

Austria’s two main parties, the Social Democrats (SPÖ) and the conservative People’s Party (ÖVP) suffered disastrous losses in local elections in Upper Austria last weekend. The main winner of the poll was the far-right Freedom Party (FPÖ), which finished second after its share of the vote soared 15 percentage points.

That has ratcheted up tension in the crucial city-state poll in Vienna on October 11th. The Austrian capital is traditionally a “red” city, governed by the SPÖ since 1945, but polls show the FPÖ just a few points shy of first place.

The right-wing populist party is riding a wave of public concern over the refugee crisis and is already Austria’s most popular grouping in national opinion polls, with about a third of the vote.

“Refugees who need protection should get it,” said Reinhold Mitterlehner, ÖVP chairman and deputy chancellor, in a newspaper interview. “But the state’s sovereignty to decide who immigrates should remain in place.”

“If we are unable to show soon – in the coming months – that we are willing and able to govern, then it makes little sense to keep messing about,” said Mr Mitterlehner.

“After [last weekend’s] Upper Austria state election, I am not prepared to be an idle passenger.”

Driving political debate in Austria is the 170,000 people who entered the country last month. Though mostly in transit to Germany, Austria still expects a record 80,000 asylum requests this year.

FPÖ leader Heinz-Christian Strache has described the situation as “asylum chaos” and placed the blame at the door of Vienna’s grand coalition.

Mr Strache, the FPÖ’s lead candidate in the upcoming Vienna city-state election, said his party was rising in polls because only it had “understood people’s concerns and was taking them seriously”.

He is already feeling the pressure from Berlin to end its practice of sending up to five trains full of refugees through Austria daily into Germany.