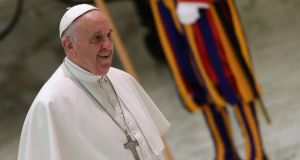 Not for the first time, Pope Francis’s habit of forthright speaking, even in a private context, has caused a deal of difficulty for the Vatican’s diplomatic machine.

On Wednesday, senior Vatican spokesman Fr Federico Lombardi revealed that the secretariat of state had sent an “explanatory” note to the Mexican Ambassador to the Holy See, reassuring him that Pope Francis had no desire “to wound the sentiments of the Mexican people”.

This note was prompted by media reports that the pope had warned against the “Mexicanisation” of Argentina’s growing drug trade.

In a private email to an Argentine friend, Gustavo Vera, a political activist who runs an NGO and who works with drug victims, the pope had replied to Vera’s concerns about the “unstoppable growth” of the drug trade in Argentina: “Hopefully, we’re in time to avoid ‘Mexicanization’...I’ve been talking with some Mexican bishops, and the situation is terrifying.”

Mr Vera made the message public on Twitter. Even if the message had originally been private, Mexico still protested with one senior diplomat expressing his “sadness and concern” about the stigmatisation of the country.

In his note on Wednesday morning, Fr Lombardi said the Pope did not intend to offend Mexicans, but rather underline the seriousness of the drug trafficking phenomenon in countries like Mexico and elsewhere in Latin America.

It said: “The Pope absolutely did not intend to wound the feelings of the Mexican people, whom he loves greatly. Nor did he intend to play down the Mexican government’s commitment to the fight against narco-trafficking.

“The expression, ‘avoid the Mexicanisation’ was used in a private email in reply to an Argentine friend much involved in the battle against drugs, a friend who had used this expression (in his mail)...”

In response to the “Mexicanisation” comment, Mexico issued a diplomatic note to the Vatican and summoned the Papal Nuncio in Mexico, French Archbishop Christophe Pierre, to express “sadness and concern” over the email.

Mexican secretary of foreign affairs, Jose Antonio Meade Kuribreña, who met with the Papal Nuncio, later said that instead of stigmatizing Mexico or any other region of Latin America, new approaches should be found in the fight against the drug trade.

The pope is unlikely to make further comment on the matter because he and many senior Curia figures are currently on a Lenten spiritual retreat in Ariccia in the Alban Hills, south of Rome.

According to the most recent report from the United Nations Office on Drugs and Crime, Argentina is the third largest global exporter of cocaine, after Colombia and Mexico.

Augusto Vera told Argentina’s Todo Noticias earlier this week that the pope “loves the Mexican people very much,” but that he is concerned that Argentina might find itself mirred in the sort of “undeclared civil war between cartels” that has caused so much bloodshed and violence in Mexico and Colombia.