Vatican spokesman denies the story, saying it is ‘unfounded’ and ‘irresponsible’ 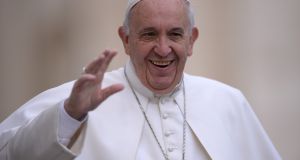 Newspaper group claims that a small dark spot on Francis’ brain was identified during a check-up seven months ago. Photograph: AFP/Getty Images

The Vatican has strongly denied Italian media reports that Pope Francis is suffering from a brain tumour.

Senior Vatican spokesman Father Federico Lombardi responded after newspaper group Il Quotidiano Nazionale (QN) reported that Francis is suffering from a benign brain tumour which will require treatment, although not an operation.

QN reported that Japanese specialist Professor Takanori Fukushima from the San Rossore di Barbarcina clinic near Pisa had been secretly helicoptered into the Vatican in January this year to examine Pope Francis.

“I fully confirm my previous statement [dismissing the reports], having verified the facts with the appropriate sources, including the Holy Father,” said Fr Lombardi. “No Japanese doctor has visited the pope in the Vatican and there have been no examinations of the type indicated in the article.

“The competent offices have confirmed that there have been no arrivals of external parties in the Vatican by helicopter; similarily, there were no arrivals of this type during the month of January. I am able to confirm that the pope is in good health.

“I reiterate that the publication of this false information is an act of grave irresposibility, absolutely inexcusable and unconsionable. It would be equally unjustifiable to continue to fuel similarily unfounded information. It is hope therefore that this matter be closed immediately.”

Prof Fukushima, who also teaches at Duke university and at West Virginia university, reportedly concluded that an operation would not be necessary but that the pope must undergo treatment to deal with the tumour.

By way of proof that the consultation with the Japanese specialist actually took place, QN reported that the papal helicopter was noted landing, unannounced, near Pisa some months ago.

The newspaper bases this report on unnamed sources, presumably within the clinic. It also claims that, after having seen the papal brain scans, one unnamed nurse immediately went to the clinic’s chapel to light a candle to the Virgin Mary.

Despite the Vatican’s denials, Andrea Cagnini, editor of QN, is sticking by his story. In an editorial, he explained why the group had decided to publish the story: “It is understandable and to be expected that the Holy See would deny the story. We delayed the publication of this news for a long time in order to check it out.

“We have not the slightest doubt about its veracity. We debated at length as to whether we should publish it or not.

“In the end we decided that that which applies to a head of state or government also applies to the pope – the enormous public responsibilities of such people weigh heavily and lead us to conclude that the right to privacy is less important than the right of public opinion to be informed.”