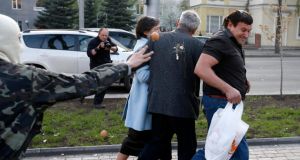 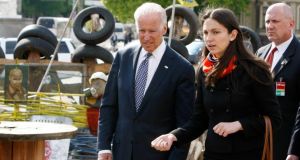 US vice-president Joe Biden visits Mikhailovskaya Square in Kiev yesterday. A tent camp erected by activists of the Euromaidan movement is visible in the background. Photograph: Reuters/Valentyn Ogirenko


The United States has told Russia to stop “pulling Ukraine apart” or face tougher sanctions, as Kiev restarted a military-led “anti-terrorist” operation against pro-Moscow rebels whom it accused of torture and murder.

“We in the United States stand with you and the Ukrainian people . . . There are some who are trying to pull Ukraine apart,” US vice-president Joe Biden said in obvious reference to Russia, which annexed Crimea last month and is now accused of destabilising eastern Ukraine by backing armed separatists.

“We call on Russia to stop supporting men hiding behind masks in unmarked uniforms, sowing unrest in eastern Ukraine,” Mr Biden said during a visit to Kiev.

“We have been clear that more provocative behaviour by Russia will lead to more costs and to greater isolation,” he added.


Consequences
The US and EU have imposed financial and travel sanctions on Russian officials and businessmen with close ties to the Kremlin, and Washington warned on Monday that “there will be consequences” if Russia does not act “over the next pivotal days” to rein in rebels who have seized official buildings in eastern Ukraine.

According to a deal agreed in Geneva last Thursday, all illegal armed groups in Ukraine should lay down their weapons and leave occupied buildings as a first step to defusing the worst east-west crisis since the Cold War.

“We’ve heard a lot from Russian officials in the past few days. But now it’s time for Russia to stop talking and start acting . . . We will not allow this to become an open-ended process. Time is short in which to make progress,” Mr Biden said, while also calling on Moscow to pull its troops back from close to Ukraine’s border.

The rebels refuse to relinquish buildings they have taken before the resignation of a government and presidency in Kiev that they call a “junta”, having allegedly seized power illegally through protests that ousted ex-president Viktor Yanukovich in February.


Referendums
The militants intend to hold May 11th referendums in several eastern towns and cities on declaring independence from Ukraine. Some rebel leaders say that another vote could follow on whether to join Russia.

Moscow brushed off the threat of sanctions and urged the Kiev government – which Russia also considers illegitimate – to disarm “radicals” that it claims hold millions of weapons, including members of Ukraine’s new national guard.

“How are these radicals, who sometimes declare themselves to be national guards and thus receive official status, to be disarmed,” asked Russia’s envoy to the United Nations, Vitaly Churkin.


Bodies found
Mr Turchinov said the bodies of “two brutally tortured people” were found in the flashpoint of Slovyansk yesterday. He said one was that of a local member of his own party, who was abducted on Monday. He did not reveal the identity of the other victim.

“The terrorists who have in fact taken hostage the entire Donetsk region have crossed a line by starting to torture and kill Ukrainian patriots,” Mr Turchinov said, claiming that “the crimes . . . [have] the full support and connivance of the Russian Federation”.

“They have brazenly challenged not only our country, but the entire international community, when they flagrantly disregarded decisions taken in Geneva,” he added.

The militants are believed to be holding four journalists captive in Slovyansk, including US reporter Simon Ostrovsky. Ukraine’s defence ministry said yesterday that a military observation plane was hit by gunfire over the city, but landed safely.