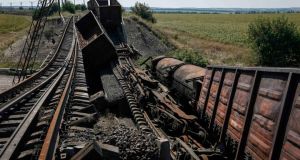 Train wagons are seen on the destroyed railway bridge which collapsed during the fighting between the Ukrainian army and pro-Russian separatists, over a main road leading to the eastern Ukrainian city of Donetsk. Photograph: Reuters 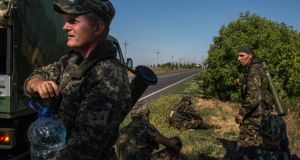 Ukrainian soldiers regroup in a defensive position after coming under heavy shelling in Novoazovsk, Ukraine, a town near the Russian border. Photograph: New York Times

Further violence in Ukraine marks a dangerous escalation, but there is no way of verifying the latest reports of a Russian invasion, a top UN official told the Security Council today.

In an emergency session on the growing crisis, members expressed outrage, with US ambassador Samantha Power saying Russia “has manipulated. It has obfuscated. It has outright lied.”

The emergency Security Council meeting came hours after a top Ukrainian official said two columns of Russian tanks and military vehicles fired missiles from Russia at a Ukraine border post, then rolled into the country.

That opened a new front in the war in eastern Ukraine between pro-Russia separatists and the new government of president Petro Poroshenko.

Statements from Nato, Mr Poroshenko, the separatists, the United States and the president of the Security Council left no doubt that Russia had invaded Ukraine.

A top Nato official said at least 1,000 Russian troops had entered Ukraine with sophisticated equipment and have been in direct “contact” with Ukrainian soldiers, resulting in casualties.

The new south-eastern front raised fears that the separatists are seeking to create a land link between Russia and Crimea, which Russia annexed in March.

Ms Power reminded the council that the meeting was “the 24th session to try to rein in Russia’s aggressive acts in the Ukraine”.

“Every single one has sent a straightforward, unified message: ‘Russia, stop this conflict’. Russia is not listening,” she said, adding that Russia’s force along the border is the largest it has been since it started deploying in late May.

“We will continue working with G7 partners to ratchet up consequences on Russia,” Ms Power said.

France also threatened that sanctions will be increased if the escalation continues.

Prior to the meeting, Russian ambassador to the UN Vitaly Churkin told reporters “You’re at a loss”, offering no further comment.

UK ambassador Mark Lyall Grant told reporters: “Russia will be asked to explain why Russia has its troops inside Ukraine. It’s very clear that Russian regular troops are now in Ukraine.”

The United States accused Russia of actively fighting in eastern Ukraine in support of separatist forces and said it was considering a range of possible responses including increased sanctions.

“It is clear that Russia has not only stepped up its presence in eastern Ukraine and intervened directly with combat forces, armored vehicles, artillery, and surface-to-air systems, and is actively fighting Ukrainian forces as well as playing a direct supporting role to the separatists proxies and mercenaries,” US State Department spokeswoman Jen Psaki told a media briefing.

In response, she said, “we have a range of tools at our disposal,” adding that increased sanctions on Russia were “the most effective tool, the best tool”.

Earlier, a spokesman for UN secretary general Ban Ki-moon said he was alarmed by reports that fighting in Ukraine has spread southward, which if confirmed would mark a “dangerous escalation“ of the crisis.

“The international community cannot allow the situation to escalate further nor can a continuation be allowed of the violence and destruction that the conflict has wrought in eastern Ukraine,“ UN spokesman Stephane Dujarric told reporters.

Nato and the US have openly accused Moscow of supplying fighters and high-tech weapons to Ukraine’s insurgents, and alleged that they accidentally shot down a Malaysian airliner last month with a Russian missile.

The European Union has taken a less confrontational tack with Russia - fearing a damaging trade dispute and energy-supply problems - and is pressing Ukraine to make concessions that would mollify the Kremlin.

But it is becoming increasingly difficult for EU states that want to maintain cordial relations with Russia, foremost among them Germany, to ignore mounting evidence that Moscow’s military is active in eastern Ukraine, just as it was in Crimea.

Russia is also struggling to preserve the façade, claiming that 10 paratroopers captured in eastern Ukraine crossed the border “by accident”, and imposing a state media blackout on the funerals of soldiers reportedly killed there.