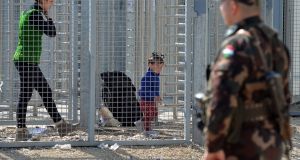 A migrant family steps to enter into the Hungarian transit zone nearby the motorway border crossing of Röszke between Hungary and Serbia. Photograph: Csaba Segesvari/AFP/Getty

Amid a domestic media campaign that has directly linked Muslim migrants with terrorism and other violent crime, Mr Orban has also introduced controversial fast-track court hearings for people accused of entering Hungary illegally.

Hungary admits only about 60 migrants each day into two so-called transit zones, with priority given to women and children, leaving dozens of men to sleep in an adjacent field without toilet or washing facilities, sometimes for several weeks.

The government has cut the capacity of the country’s open asylum reception centres over the last year, causing severe overcrowding, and passed laws this month to reduce benefits and assistance to the few who receive refugee status in Hungary.

“The asylum procedure and reception conditions are not in accordance with European Union and international standards, in particular concerning procedural safeguards, judicial review and freedom of movement,” the UNHCR said.

Despite Hungary’s border fences and Mr Orban’s claim to have “zero tolerance” for illegal migration, thousands of asylum seekers still transit Hungary each month on their way west – a trend which has angered neighbouring Austria.

“Hungary’s government miscalculated. It built its new asylum policy on being able to send people back to Serbia, but that’s not happening,” said Marta Pardavi, co-chair of the Hungarian Helsinki Committee.

“These asylum seekers are not going back. Instead, they are leaving reception centres in Hungary (and going west). Not much effort is put into stopping them. And this is good for the Hungarian reception system, because...if they stayed, it would quickly become a huge crisis,” she explained.

“Hungary would need to build new facilities to house people, and that would eventually lead to lots of people being given international protection status.”

Hungary rejects many asylum seekers’ applications because it officially considers countries that many crossed en route – Serbia, Macedonia and Greece – to be safe places in which they could have remained.

The UNHCR criticised Hungary for doing this “despite the fact that no other EU member state applies a presumption of safety to those countries and that UNHCR has recommended that asylum-seekers should not be returned to them.”

Ms Pardavi said Hungarian officials were now pushing for asylum seekers to be returned to Greece, which is already struggling to cope with 50,000 migrants stuck on its territory.

“We haven’t heard of any other EU state that is trying to do this,” she said.