Pro-EU protests stoke tension between east and west of country 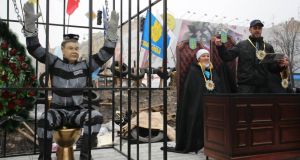 Ukraine’s pro-EU opposition parties plan to launch a general strike and an investigation into the allegedly ill-gotten gains of the country’s leaders, as they seek to maintain the momentum of protests against President Viktor Yanukovich and his government.

Hundreds of Ukrainians are still camping on Kiev’s central Independence Square and occupying Kiev city hall and a nearby trade union building, and about 50,000 people rallied on the square on Sunday.

The protesters accuse Mr Yanukovich and his allies of indulging in massive corruption, of scrapping plans for EU integration in favour of closer ties with Russia, and of failing to punish riot police and other people who have attacked anti-government demonstrators and journalists.

“We are announcing a strike for after the [New Year] holidays. We should all say that we will not work with this government,” said opposition leader Vitaliy Klitschko.

“They set cars on fire and beat activists, and they really hope we will get tired and go home. No! We will fight and force out the current rulers,” the former heavyweight boxing world champion told demonstrators.

Rallies against Mr Yanukovich’s decision to postpone a landmark deal with the EU last month swelled after riot police brutally beat unarmed protesters and journalists. Public anger has been further fuelled by subsequent attacks by unknown assailants on reporters and anti-government campaigners and their cars in Kiev and around Ukraine.

Resignations sought
Another opposition leader, Arseniy Yatsenyuk, repeated demands for the resignation of the cabinet, the punishment of those responsible for violence against demonstrators and journalists, and freedom for protesters who have been jailed.

“We are also launching a worldwide anti-corruption investigation into members of the government of Prime Minister Mykola Azarov and their relatives,” said Mr Yatsenyuk, who claims that officials have stolen billions of euro in state funds.

On Sunday, more than 1,000 people left Independence Square and went to Mr Yanukovich’s lavish residence outside Kiev, where riot police prevented them entering the vast estate. They then moved on to the heavily guarded mansions of Mr Azarov and other senior figures.

“Today a few people went to the homes of the country’s leaders, but if they continue to pretend nothing is happening, then millions will stand outside their houses,” said Mr Klitschko.

Demonstrators damaged a gate at the home of Viktor Medvedchuk, a powerful anti-EU politician and businessman who is a close friend of Russian president Vladimir Putin.

“The only thing worse than an idiot is an active idiot,” Mr Medvedchuk said in a post on Facebook. “They want to fight? I know how to fight. And we have enough strength and capabilities to defend our views and beliefs. And we will do it.”

National divide
Several cities in largely pro-EU western Ukraine openly back the opposition protests and have rejected the authority of local representatives of the central government. Meanwhile, eastern and southern regions broadly support Mr Yanukovich and favour strong ties with Russia, stoking fears of a possible split in the country of 46 million people.

The governor of the eastern Kharkiv region, Mikhail Dobkin, said of Sunday’s protests: “This idiocy has gone beyond all bounds. It’s shameful to live in the same country as these psychopaths. The Molotov-Ribbentrop Pact needs to be annulled.”

Western areas of Ukraine, bordering the EU, were annexed by the Soviet Union under its 1939 non-aggression pact with Nazi Germany. Until then they were part of Poland and, earlier, the Austro-Hungarian Empire. Eastern and southern regions were ruled from Russia for centuries, before independence in 1991.