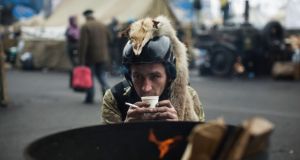 A member of a civilian defence unit warms up by a fire at Independence Square in Kiev today. Photograph: Uriel Sinai/The New York Times

Ukraine’s acting president warned today about the increasing signs of signs of separatism and threats to the country’s territorial integrity.

Speaking following a meeting of security chiefs in the Crimea today acting president Oleksander Turchinov said anyone who found responsible for separatist moves should be punished.

Protesters on the southern peninsula have staged rallies against Ukraine’s new leaders since president Viktor Yanukovich was ousted.

Earlier today Ukraine’s parliament voted to send Mr Yanukovich to be tried by the International Criminal Court for “serious crimes” committed during violent anti-government protests in which scores were killed.

A resolution, overwhelmingly supported by the assembly, linked Mr Yanukovich, who was ousted on Saturday and is now on the run, to police violence against protesters which it said had led to the deaths of more than 100 citizens from Ukraine and other states.

The Hague-based court said it would need a request from the government of Ukraine giving it jurisdiction over the deaths.

With early elections set for May 25th, one of Ukraine’s most prominent opposition figures, retired world boxing champion Vitaly Klitschko, confirmed he would run for president.

Mr Yanukovich was indicted for “mass murder” on Monday over the shooting of demonstrators and is now on the wanted list, having last been seen at Balaclava in Crimea, near Russia’s Sevastopol naval base.

An aide said be on the run with Mr Yanukovich was shot in the leg, his spokesman said. It was not clear where the aide, Andriy Klyuev, was, or whether he with the fugitive leader.

The assembly resolution said former interior minister Vitaly Zakharchenko and former prosecutor-general Viktor Pshonka, who are also being sought by the authorities, should also be sent for trial at the ICC.

Authorities under Mr Yanukovich had systematically abused their power. Police tortured protesters, including holding activists naked in temperatures of 15 degrees below freezing, the resolution said.

The Hague-based International Criminal Court, which since its founding in 2002 has handled only cases from Africa, said it could intervene if Ukraine requested it to.

Mr Yanukovich left Kiev by helicopter on Friday, heading for his power base in the east, where he was prevented from flying out of the country and then diverted south to Crimea.

Although Ukraine has started a campaign for presidential elections on May 25th the Ukrainian parliament has delayed the formation of a new government, reflecting political tensions and economic challenges after the Russia-backed president went into hiding.

Parliament speaker Oleksandr Turchinov, who was named Ukraine’s interim leader after Mr Yanukovych fled, said that a new government should be in place by Thursday, instead of today, as he had earlier indicated.

Ukraine is being governed by an interim government led by parliament speaker Oleksandr Turchinov.

Authorities in the capital, Kiev, have issued an arrest warrant for Mr Yanukovych over the killing of 82 people, primarily demonstrators, in clashes between protesters and police.

Mr Turchinov, told parliament he expects lawmakers to vote today on a national unity government led by a prime minister people would trust.

The chair of the European Parliament’s foreign affairs committee Elmar Brok said today the EU and international community needed to give financial aid to Ukraine as soon as a new government is formed.

“We in parliament will not be the ones to delay anything,” he said.

“There is enormous amount of pressure at the moment to avoid bankruptcy and complete dependency on Russia. ”

He said it was possible Russia could reduce the subsidies for the Ukraine, which would cause further financial difficulty for the country.

“When this government is elected there will be immediate discussions (about the package). I’m quite confident in the course of this week a proposal for this short term package will be on the table, which is needed to avoid a default.”

Mr Brok said during the visit to Ukraine this week he had noticed the atmosphere in Kiev was no longer one of oppression.