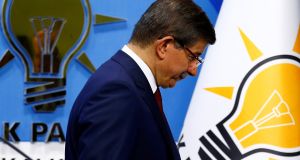 Turkish prime minister Ahmet Davutoglu announced on Thursday he would not stand again as leader of the ruling AK Party, bowing out as President Recep Tayyip Erdogan accelerates his drive for a stronger presidency set to reshape the political landscape.

In a speech defending his record as prime minister but also vowing loyalty to Mr Erdogan, Mr Davutoglu said he had kept his party and the government intact during a tumultuous period in Turkey and pledged that “strong” AKP government would continue.

After a meeting of the party’s executive committee, Mr Davutoglu told a news conference that under the current circumstances he would not run for the leadership of the AKP at an extraordinary party congress on May 22nd.

“I am telling our members, up until today I was leading you. From now on, I am among you,” he said, vowing to continue his political struggle as an AKP lawmaker.

Mr Davutoglu’s departure plunges Turkey into political uncertainty just as Europe depends on it for help in curbing the migration crisis and as Washington draws on the Nato member’s support in fighting Islamic State in Syria and Iraq.

Turkey could now face an early general election this year as Mr Erdogan pushes ahead with plans to strengthen the presidency.

Mr Davutoglu had offered only lukewarm support for Mr Erdogan’s vision and his departure follows weeks of tensions. His successor is likely to be more willing to back Mr Erdogan’s aim of changing the constitution to create a presidential system, a move that opponents say will bring growing authoritarianism.

“From now on, Turkey’s sole agenda is the presidential system and an early election,” said Mehmet Ali Kulat, head of the pollster Mak Danismanlik, which is seen as close to Mr Erdogan. He forecast an election in October or November.

Mr Erdogan wants Turkey to be ruled by the head of state, a system he sees as a guarantee against the fractious coalition politics that hampered the government in the 1990s. His opponents say this is merely a vehicle for his own ambition.