Thousands turn out for Greek protest in Dublin

Thousands turned out in Dublin calling for a 'no' vote in the upcoming Greek referendum. Trevor Hogan and Ruth Coppinger made impassioned speechs in support of the Syriza government. 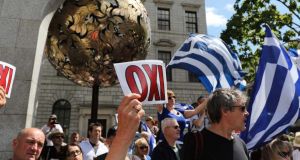 Protestors gather at the Central Bank in Dublin in support of the Greek solidarity movement. Photograph: Nick Bradshaw 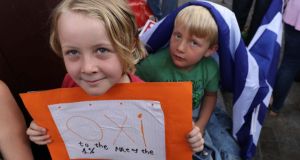 Some of the younger protestors at the Central Bank in Dublin in support of the Greek solidarity movement. Photograph: Nick Bradshaw 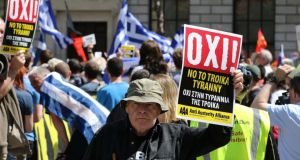 A protestor at the Central Bank in Dublin in support of the Greek solidarity movement. Photograph: Nick Bradshaw

Thousands of protesters waved Greek flags as they marched from the Central Bank to the Dáil on Saturday afternoon in solidarity with Greece.

“Athens Athens we’re with you, we’re against the Troika too,” the crowd chanted as it made its way through Dublin city centre, ahead of Greek’s referendum on austerity measures on Sunday.

Co-ordinator of the Greek Solidarity Committee Ronan Burtenshaw said the issue isn’t Greece against Europe, but a battle between “ordinary people across Europe against our elites”.

A member of An Garda Síochána said he believed there was about 3000 people at the protest, which made its way from Dame Street up to the European Commission Office on Molesworth Street, before ending at the Dáil.

Dimitrios Tsouros, an elderly Greek man who has worked for the United Nations, said at the protest that he hopes the Greek people will forget about their differences and be united as a part of the European Union.

“The European Union has to be more amicable, much more giving, more respecting of the other countries’ problems and trying to help as much as they can”.

“ Of course we have our own faults, but every country does. We are Greeks, we love our country and we want it to progress and go ahead”.

The demonstration was organised by the Greek Solidarity Committee and is supported by anti-austerity groups and politicians.

The theme of the march was “We say No too,” which organisers said expressed the “common battle against austerity in both countries.”

The protest in Dublin was a message of solidarity with Greece but also an anti-government march involving wider issues, with posters and speakers from the anti-water charges campaign.

Irish rugby player Trevor Hogan spoke to the crowd at the Central Bank about the “right wing austerity vultures” in the Irish government and the EU, and thanked the people of Greece “for exposing the lies and ripping that mask off the EU’s face”.

“The quote that drives me in my life and always keeps me going is Desmond Tutu when he said that to be neutral in times of injustice, is ultimately to be on the side of the oppressor”.

Greece’s government has called for a referendum for Sunday after months of talks with creditors over an aid-for-reforms deal broke down without agreement.

Prime minister Alexis Tsipras has said the referendum is not about Greece’s membership of the EU, but a chance for Greeks to say whether they are willing to bear more austerity, demanded by the European Commission, the European Central Bank and the International Monetary Fund as part of a proposed deal.

The Yes vote has taken a slim lead in polls ahead of the historic referendum on Sunday.

Mr Tsipras told No supporters at a rally in Syntagma Square in Athens on Friday to say no to “those who terrorise you”.

Mr Burtenshaw of the Greek Solidarity Committee said that the demonstration in Athens on Friday was the “biggest act of defiance yet seen to the rule of the Troika in Europe”.

“Today in Dublin, along with marches in Spain, Portugal, Italy, France and Germany, we will show that ordinary people across the continent stand with them, for a meaningful democracy and against endless austerity”.