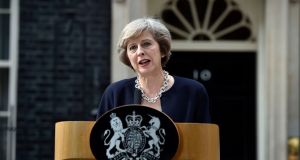 The appointment of Theresa May as British prime minister has brought a sliver of clarity to the complex process that has emerged from the British referendum on EU membership.

Former prime minister David Cameron said in June it would fall to his successor to navigate Britain’s exit negotiations. With the appointment of May as prime minister this week rather than at the Conservative Party conference in September, that process has been brought forward by two months.

The former home secretary is well-known in Brussels. As the country’s longest-running home secretary, she regularly attended justice and home affairs council meetings in Brussels and Luxembourg, though her tough line on refugees put her at odds with the push from the European Commission and Berlin last year for greater burden-sharing among EU member states.

Unlike Ireland, Britain did not opt in to the EU’s relocation plan. Instead, May was one of the most vocal opponents, arguing that nothing should be done to encourage more people to journey to Europe.

With free movement and immigration set to become the central issue for Britain in its forthcoming negotiations, the new prime minister is likely to drive a hard bargain.

Though well-respected as a pragmatic, albeit right-wing, operator, May has indicated she will not be rushed into a swift invocation of article 50, potentially setting her on a collision course with Brussels.

European Parliament president Martin Schulz has already called for exit negotiations to start quickly. “Now that the country has full clarity on its new prime minister, after the summer I expect the British government to notify its intention to withdraw the UK from the EU,” he wrote this week.

May, in contrast, has said she will not trigger article 50 until next year. The nomination this week of Julian King, a former British ambassador to Ireland, to replace Jonathan Hill, the British commissioner who resigned in the wake of the British referendum, suggests Britain is embedding itself in the EU decision-making process for the medium term at least.

The prospect of long, drawn-out discussions were raised by outgoing foreign secretary Philip Hammond, who told the House of Commons on Tuesday the exit process could take six years.

Most significantly, the appointment of May may have killed off any hope the British vote could be reversed. Ironically, despite the fact May campaigned to remain, she will be more likely to implement the vote as she tries to appease Leavers in the government who believe a Brexiteer should be leading the country.

Her remarks on Monday were clear. “There will be no attempts to remain inside the EU, no attempts to rejoin it by the back door, and no second referendum,” she said to cheers. “Brexit means Brexit.”

For the EU, apart from exerting political pressure on Britain, there is little to be done before Britain triggers article 50, though at a diplomatic level, discussions are under way between the 27 members ahead of their summit in Bratislava in September.

Taoiseach Enda Kenny’s visit to Berlin on Tuesday is one of a series of bilateral meetings that will take place in the coming weeks and months. François Hollande’s trip to Dublin next Thursday is one stage in a wider post-Brexit tour by the French president, who visits Portugal on Tuesday and Austria and Slovakia on Wednesday.

As the EU wisely lets the Westminster drama play out before committing itself to further pronouncements on the future of Europe, there was some positive news for Brussels this week.

A number of polls showed that, rather than triggering a wave of Eurosceptic sentiment across the Continent, the immediate impact of the British referendum result has been to shore up support for the European project.

In Germany, right-wing party Alternative for Deutschland (Afd) has seen its support fall, while chancellor Angela Merkel’s popularity ratings have hit a 10-month high. A poll in the Netherlands showed a drop in support for Geert Wilders’s Freedom Party. Similar trends were evident in Denmark and Finland, where support for the EU has increased since the Brexit vote.

While the trend could be a short-term reaction to the shock referendum result, the first real test for the EU project will be the re-run of the Austrian presidential election on October 2nd following the narrow defeat of the far-right candidate in May.

This will be the first opportunity to see how Britain’s vote to leave the EU impacts on the ballot box, as the EU comes to terms with a future without its second-largest economy.