Theresa May and Angela Merkel: Outsiders who rose to top

The most powerful women in Europe share more than biographical details 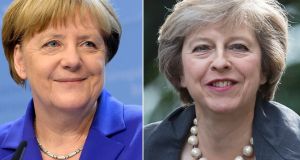 Even before Angela Merkel and Theresa May spoke on Wednesday evening, during the new British prime minister’s first phone call from Downing Street, the two politicians had been marked out as childless pastor’s daughters.

It’s a superficial comparison that says more about lingering sexism in politics – and political journalism – than it does about the two leaders. And, combined with the chatter about their appearance and private lives, it serves as a reminder of the differing levels of scrutiny women and men face in public life.

For Evelyn Roll of the Süddeutsche Zeitung daily, an early Merkel biographer, it isn’t an insult to mention that both women are childless daughters of clergymen.

“The question is whether the similarity explains anything of significance,” she said. “I find it more interesting how both women were only allowed their political chance after the boys crashed the cart into the mud.”

While David Cameron’s Brexit bust was Theresa May’s moment, Angela Merkel’s chance came with a political fundraising scandal around ex-chancellor Helmut Kohl in 2000. With their Christian Democratic Union (CDU) party rocked to its foundations, the eastern German woman was faster than her West German male rivals to distance herself from the damaged Kohl – and Wolfgang Schäuble, Kohl’s successor as CDU leader.

May’s description of herself in her candidacy speech as someone who prefers to get the job done rather than gossip about others would have struck a chord with Merkel voters.

And May’s apparent lack of close friends in her party or at cabinet is something she also shares with Merkel, a fact that has done neither woman any harm. In what little private lives they have, both women prefer hill-walking and cooking to pubs or premieres.

Their gender has brought both a certain outsider status in politics, but there are crucial differences. May’s working-class background sets her apart from Cameron’s Notting Hill set – but she studied at Oxford and wanted to be a politician from a young age.

Merkel fell into her second life by chance, after the physicist volunteered with a party in the post-Berlin Wall era. Once elected to Bonn, she remained an outsider thrice over: as an East German protestant in western, Catholic Germany.

But she had already learned the lesson, as a pastor’s daughter in the atheist, socialist East Germany, that outsiders have to work harder to match the others – and to get ahead. Her low-key assiduousness assisted her rapid but noiseless rise through the macho CDU ranks.

For Theresa May, being a vicar’s daughter in England put her at the heart of the community, not at its fringes. Yet, as with the chancellor, overcoming the odds stacked against women in politics perhaps helped her survive in the home office longer than any recent predecessor.

Allies of both women describe them in similar terms: calm, methodical operators who are more interested in solutions than testosterone-fuelled ego trips. Both have a moral, principled streak to their politics, a quality they perhaps picked up in their Christian homes.

Yet both are cold-eyed pragmatists, happy to dump principle if it is politically opportune. That was clear from Merkel’s abandonment of nuclear energy after the 2013 Fukushima disaster or in May’s shift from gay rights opponent to proponent of marriage equality.

One common trait that may yet prove a source of tension is their love of sitting things out. After the Brexit vote Merkel, with uncharacteristic haste, insisted there would be no talks with London on Brexit conditions until it officially asks to leave. But May, exuding an unruffled and almost Merkellian air, vows to do nothing until she sees what deal is likely.

In their phone call on Wednesday, the two leaders promised close co-operation in the spirit of their friendly relations. But faced with Brexit leader Theresa May, Angela Merkel may have met her match in the politics of procrastination.