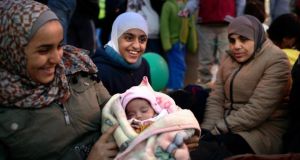 From the top of Syntagma Square in Athens, it looks like the typical Sunday morning routine as the ceremonial changing of Greece’s presidential guard takes place at the tomb of the unknown soldier, just beneath the 19th-century parliament building.

The tall Evzones, as the guards are known, are dressed in traditional Greek garb and command not only the attention and respect of Greeks and tourists lining the street, but of some 200 Syrian men, women and children, lined up on the other side of the street.

These refugees from the wartorn country have just spent their fifth night sleeping out on the square with only blankets to protect them from the cold in protest at the atrocious conditions they claim they have faced since arriving in Greece.

Standing in dignified silence as the Evzones march by, they clutch large banners in Arabic, Greek and English. “We escaped death in Syria to the vagrancy of Greece,” reads one. Most Syrians attempting to reach more northerly EU countries pass through Greece first.

Few of the other Evzone- watchers take notice or venture over to talk to the Syrians, who are only too eager to share their devastating stories from home. Men such as Bakri Laham from Aleppo, who lost his wife when their home was bombed, or Kobani native Mustafa Hussein, who has lost all contact with his family but knows that his 65-year-old father was arrested by Islamic State forces.

Identifying himself only by a nickname, Abu Odai describes himself as the co-ordinator of the public sleep-in. The 29-year-old Damascus native has been in Greece three months. He says he and his compatriots feel trapped by EU rules in a country that has little or no infrastructure to help them.

“We came here dreaming of a safe life. But in Greece the only right we seem to have is the right to spend whatever money we’ve left,” Abu Odai says. The cost of fending for themselves is sapping Syrian refugees of the means they need to reach their preferred destinations in other EU countries where many have family, he says.

While an EU regulation, called Dublin II, states that refugees must apply for asylum in the EU country they first set foot in, none of the Syrians deem Greece an option as they are aware that asylum in Greece offers basic protection against deportation but nothing in terms of social integration.

As Abu Odai explains, traffickers are now asking up to €10,000 to smuggle people from Turkey to the centre of Europe: half for the perilous sea journey across Greece’s border with Turkey and half for the equally treacherous remainder of the journey. A fortnight ago, he tried to cross the frontier into Albania on foot in the hope of reaching Montenegro.

A few kilometres into their journey, he says, Albanian police opened fire on them. “They were shooting directly at us, not in the air.”

Other Syrians at the protest describe how, unable to legally sign rental contracts, they are falling victim to unscrupulous landlords – of various nationalities – who overcharge them to stay in substandard, overcrowded accommodation in Athens.

One family of three adults and seven children aged from three to 12, say they paid €900 to rent a place for a month, only to be thrown out of it a fortnight later by the landlord because “the children were too noisy”.

With no contracts, they saw no point in reporting him to the police, who routinely refuse to accept complaints from migrants, according to human rights groups. That experience, and being tricked by a trafficker who abandoned them in a shed in a forest in Macedonia for a week before tipping off the local police about them, has left them penniless.

Ghaida, who used to teach English, says she and her son, Mohammed (18), have also run out of money and have been sleeping in doorways and in parks around Athens city centre.

“Syrians are hardworking. We want our children to continue their education. I took this risk to come here with my son, who wants to study IT, leaving my husband and daughter in Damascus,” she says. Before the war, she said she had travelled all over Europe and never could have imagined she would become a refugee.

“We just want Europe to help us. Why doesn’t the UK, France or Ireland take more Syrians? Many of us are educated people, like doctors and engineers,” she says.

While the protest prompted interior ministry officials to offer immediate asylum status to applicants with identity papers, most of the protesters just want the freedom to move deeper into the EU. “As someone from parliament told us, Greece has no rights to give us,” one protester says.