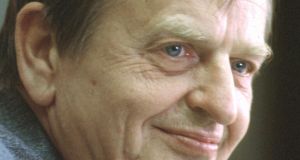 Olof Palme: attracted worldwide attention for his strident criticism of US involvement in Vietnam and of the Cold War arms race.

A politician is shot dead on an open Stockholm street but no one knows why, or by whom. Three decades on, a cloud still hangs over the night Sweden’s popular Social Democrat prime minister Olof Palme was shot in the back as he strolled home from the cinema with his wife Lisbeth.

Mr Palme was seriously wounded, his wife grazed by a bullet and the gunman escaped up a flight of stairs. The killer remains as elusive as the murder weapon and the motive.

Mr Palme was rushed to a nearby hospital but pronounced dead on arrival. Sweden has never fully recovered from February 28th, 1986. “It is a trauma for the country that we have never cleared up the murder,” said Kerstin Skarp, Swedish state prosecutor, in Stockholm.

Swedish police have questioned more than 10,000 witnesses, produced about 90,000 pages of reports and crossed off their list some 133 people who each claimed to be the assassin.

The only man ever linked to the killing, Christer Pettersson, was convicted in 1989 after being identified by Mr Palme’s wife. But he was later cleared on appeal after claims police influenced Mrs Palme during a line-up. Pettersson  died in mysterious circumstances in 2004.

In 2012 Olof Palme’s son Joakim said his father usually had a bodyguard but had sent him home that evening after deciding not to go out.

When his plans changed, Mr Palme’s son said his father had tried but failed to reach anyone at Swedish security services, so he headed out anyway to the cinema with his wife. Even with a bodyguard, however, Joakim Palme said there was no guarantee his father’s life would have been saved.

As a two-term prime minister, Mr Palme was a hugely popular and influential figure. Though born into a wealthy Stockholm family in 1927, Mr Palme insisted he belonged to the labour movement and is credited with shaping the modern Swedish welfare state with his pro-labour, anti-racism policies.

After becoming Social Democratic party leader and prime minister in 1969, he attracted worldwide attention for his strident criticism of US involvement in Vietnam and of the Cold War arms race he dubbed a “race to oblivion”.

Given his outspoken views, conspiracy theorists have had a long list of suspects over the years, from the CIA and Yugoslav gangs to Sweden’s own Säpo security service.

Before his death in 2004 Stieg Larsson, creator of the best-selling Millennium trilogy, handed police documents he said indicated the killer was a Swedish mercenary, hired by the South African security forces to silence Mr Palme and his opposition to apartheid.