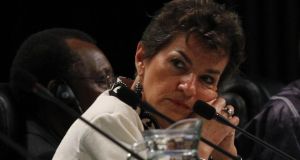 The global agreement to combat climate change due to be concluded in 2015 is now likely to include a “dynamic” element that would allow new scientific evidence to be taken on board as time passes.

At the end of a week-long round of talks in Bonn, UN climate chief Christiana Figueres said it was still unclear how this racheting mechanism would be achieved, but the process needed to “match the clarity” of science.

After what she described as a “very productive week, with a very positive and constructive tone”, she said there was “common ground that the agreement in 2015 cannot be cast in stone”, but rather needed to “bring on board the emerging science”.


‘Just the start’
Ireland’s David Walsh, speaking on behalf of the EU, agreed the talks had exhibited “a high level of engagement and general convergence of ideas”, but it was “just the start” of a process that would need more work on the “core elements” of a deal in 2015.

Co-chairs Jayant Moreshver Mauskar, of India, and Norway’s Harald Dovland said in a joint statement that they were “heartened” by the talks. “But we have limited time to have a draft negotiating text ready and available in less than two years from now.”

Climate Action Network International (Cani) also welcomed a “new, positive dynamic” emerging from the the talks, particularly in terms of equity and fairness, but urged world leaders to “ensure that the 2015 climate plan is robust enough to save the planet”.

Mohamed Adow, of Christian Aid, said “previous silence on the issue of fairness had threatened to derail progress in the negotiations, but by beginning to openly tackle the problem now, confidence has been boosted among developing countries ”.


Show me the money
But Tracy Carty, of Oxfam, warned that climate finance for poorer countries could be a deal-breaker.

“Despite the commitment to mobilise $100 billion per year by 2020, we have had no more clarity this week on who is providing what,” she said.

Cani’s Julie-Anne Richards urged delegates not to weaken the structure of a 2015 deal merely to ensure that the US was part of it.

“We need a plan that secures us all a fair and sustainable future, not one that appeals to the lowest common denominator ,” she said.

Meena Raman, of the Third World Network, said US proposals for a “do-what-you-like deregulated system where no country compares its climate goals to science, its responsibility or the rest of the world, would be laughable if it weren’t so frightening ”.

The ad hoc working group on the Durban Platform for Enhanced Action, or ADP, will reconvene in Bonn early next month for two weeks of solid negotiations – and Ms Figueres has invited some of the delegates to stay until then, instead of flying home.