Spanish Prime Minister Mariano Rajoy was left unhurt, and a minor was arrested, after the 60-year-old politican was punched in the face during a campaign event for the general election. Video: Reuters 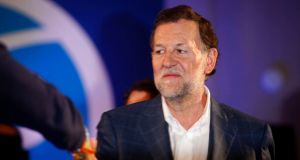 Spanish prime minister Mariano Rajoy was punched in the face during a campaign event for Sunday’s general election in his home region of Galicia on Wednesday, TV footage showed.

The prime minister (60), was unhurt, a People’s Party spokesman said, but Mr Rajoy appeared later with a deep red mark on his face.

A young man punched Mr Rajoy hard on the side of his head, knocking his glasses off, as he walked through the town of Pontevedra. The young man, a minor, was subsequently arrested, police confirmed separately.

Mr Rajoy sent a message on Twitter, thanking his supporters and reassuring the public. “I’m fine, and on the way to a rally in Coruna,” he said.

The aggressor had been standing next to Mr Rajoy when he suddenly struck out, catching the premier by surprise.

Mr Rajoy’s ruling People’s Party is expected to win the election, even though it has presided over one of the worst economic slumps in decades. But it may short of the parliamentary majority it has enjoyed since 2011.

Spain has one of the highest youth unemployment rates in the European Union, with almost half of all job-seekers under 25 unable to find work.