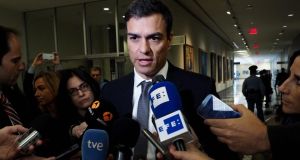 Spain’s Socialist leader, Pedro Sanchez, has apologised after he accidentally voted for a law requiring girls under 18 to obtain parental consent for abortions.

The law, introduced by the governing People’s party and long opposed by the Socialists, was promised by the conservative PP last autumn after it abandoned its controversial attemptto reverse the country’s abortion laws.

The legislation being proposed then would have turned Spain into one of the toughest places in Europe to obtain an abortion.

As Spanish politicians voted on Tuesday as to whether to accept for debate the proposed changes to the law governing teenagers and abortions, all eyes were on the PP, where several members had said they could not support the bill as it did not go far enough in curbing access to abortion.

But the surprise vote of the day instead went to the Socialist leader Pedro Sanchez, who apologised late on Tuesday for pushing the wrong button.

“My commitment to defending the freedoms of women who are minors remains firm. I’ve always defended this in public. I’m sorry for the error,” he said.

His vote was far from decisive; the PP’s absolute majority ensured the vote was passed by 184 votes in favour to 136 against.

On Wednesday, as social media poked fun at the opposition leader’s blunder, likening him to Homer Simpson at the control panel or Home Alone’s Kevin McCallister, Mr Sanchez repeated his apology, telling reporters it was “an error that I regret tremendously”.

His colleagues defended him and sought to deflect the attention back to the PP. “It’s one thing to vote for this in error, it’s another to vote for it conscientiously,” a fellow Socialist, Cesar Luena, pointed out.

In 2010, under the Socialist government, Spain relaxed its laws on abortion, allowing 16- and 17-year-olds to have abortions without parental consent. Under 18s must still inform their parents of their plans to have an abortion, except when it could lead to dangerous situations or hardship.

In 2014, 400 children in Spain did not inform their parents before having an abortion, for reasons that ranged from risk of abuse to lack of parental support, according to ACAI, the umbrella group that represents 98 per cent of the country’s abortion clinics.

The PP’s push to reverse the law has been ardently opposed by many, including 22 organisations that argued in an open letter last month that the proposed changes would place young people at risk of serious conflict, violence or abuse. “It will disproportionately affect girls who are already in vulnerable situations,” they noted, “and create an unjustified barrier in accessing safe, legal abortions.”

Under the proposed legislation, in the case of disagreements between the girl and her parents, a judge would have the final say on the abortion. Given the slow pace of Spain’s justice system, the letter’s signatories worried that the cases may not be resolved in time to allow for an abortion.

With an eye on general elections due this year, the PP has fasttracked the legislation, introducing it in a way that avoids the gathering of required reports and impact assessments normally associated with legislative reforms. The proposed changes could come into effect as early as June.