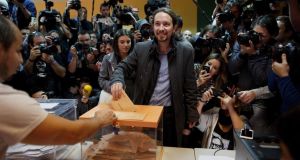 The governing Popular Party (PP) of Mariano Rajoy was celebrating victory in Spain’s general election yesterday as it held off the challenge of its socialist rivals and two new parties, Podemos and Ciudadanos.

Mr Rajoy’s insistence on the campaign trail that after half a decade of deep economic crisis he was now overseeing a sustained recovery appeared to pay off.

However, having won a landslide victory in 2011, his party has lost its majority in congress and all of Mr Rajoy’s challengers were agreed that this four-way race represented a major upheaval for the country’s political landscape.

Socialist leader Pedro Sánchez said the vote “smelt of change”, while the leader of the anti-austerity Podemos party, Pablo Iglesias (37), described it in similar terms.

“This is a watershed,” he told reporters as he voted in the Madrid district of Vallecas. “Our country is living a new transition,” he added, in reference to the so-called “Transition” process Spain went through in the late 1970s, after leaving behind four decades of dictatorship.

Although Podemos was formed early last year with the aim of winning this election, the fact it came close to taking second place from the socialists, according to exit polls, was seen as a major accomplishment.

Podemos was one of two new parties whose arrival made this election the most open for 33 years. Ciudadanos, which had been a Catalan regional party before going nationwide last year, was the other.

Both are led by charismatic young men with no experience of government but who advocate the regeneration of Spain’s discredited institutions and a crusade against the kind of corruption that has plagued the PP and socialists.

As he voted, in L’Hospitalet de Llobregat in Catalonia, Ciudadanos leader Albert Rivera (36) appealed for Spaniards to turn out en masse in order to give his party a good result.

“It’s important to mobilise if you want a change,” he told reporters. “There have never been changes in Spanish politics with a low turnout. Normally change happens when a lot of people vote.”

Mr Rivera had predicted that a turnout of 80 per cent was needed in order to unseat the PP. Instead, the figure was several points lower, a factor that probably contributed to what was a disappointing night for his party, which finished fourth.

However, it is still not clear exactly how this new fragmented political era will operate. In order to govern, Mr Rajoy will almost certainly need the support of another party.

Ciudadanos had been seen as the most likely partner, but its failure to clinch more seats means that formula could fall short.

If the PP fails to form a government, the socialists could be invited to do so, despite falling short of their own expectations. Intense negotiations between the parties will now begin over potential pacts, with issues such as how to stop Catalonia’s push for independence, the economy and constitutional reform all likely to be on the table.

At Amador de los Ríos school in central Madrid, voters were acutely aware of the unusual nature of this vote.

“These elections are much more important than others we’ve had,” said pensioner Luis Elche, after voting in a school in central Madrid. A life-long conservative he believes Mr Rajoy is the best-equipped candidate to continue Spain’s economic recovery.

“I also like Ciudadanos a lot, I like their policies,” he said. “But voting for them could be a wasted vote.”

Milton Hurtado (42) a nurse from Bolivia, voted for Podemos. Like many, he disagrees with Mr Rajoy’s assessment that Spain’s economy is bouncing back.

“These elections are different, they’re unusual,” he said. “There’s too much corruption within the traditional parties. Corruption is an important issue and so is the fact that the working classes are suffering much more than the rich.”

Although the day passed without major incidents, there was controversy when the interior ministry tweeted a picture of Mr Rajoy voting, alongside a picture of Adolfo Suárez, Spain’s first prime minister of the democratic era, with the caption: “Between these two pictures 38 years of democratic history have passed in Spain.”

On social networks, many people criticised the ministry for breaking protocol by apparently publishing propaganda on election day.