Madrid’s stance a boost to Juncker’s proposal to relocate 120,000 across EU 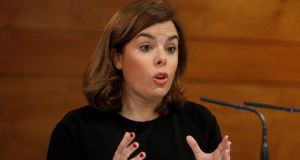 Spain has announced it would accept a mandatory quota of refugees, providing a vital boost to the European Commission before today’s announcement of a relocation plan to distribute an additional 120,000 migrants and refugees across the EU.

Jean-Claude Juncker, the president of the European Commission, is due to unveil the commission’s proposal to the European Parliament on Wednesday in Strasbourg. While significant resistance to the plan persists among some central and eastern European member states, the support of the larger EU countries such as Germany, France, Italy and Spain ensures the proposal is likely to reach the qualified majority threshold needed to gain member state approval.

Nonetheless, the EU is likely to face a strong battle about how to distribute asylum seekers. While the commission will today announce a “distribution key” outlining how migrants and refugees will be distributed across the bloc, the precise calculations are likely to be decided by member states before next Monday’s meeting of EU justice ministers.

But even before yesterday’s announcement, German chancellor Angela Merkel warned that the 160,000 relocation scheme might not be enough.

Nonetheless, the decision by Spain to back the plan provides a welcome boost.

Spain had been one of a number of countries opposing the EU’s first relocation plan announced in May. Yesterday, deputy prime minister Soraya Saenz de Santamaria said the government would now participate.

“Spain will take the refugees that the European Union asks us to,” she said. Asked about the reasons for the apparent change in policy, Ms Saenz de Santamaria said the situation had changed in recent weeks, with focus now turning away from the Mediterranean and towards eastern Europe.

Poland also appeared to soften its stance towards an EU relocation strategy, with prime minister Ewa Kopacz indicating the country could accept more migrants than the 2,000 it previously indicated.

“Our potential is bigger than the 2,000 we declared, but the conditions we set should allow those who will be coming to feel safe and that the Poles will be saying that the authorities took care that their lives were not destabilised,” she said, though Poland’s president, Andrzej Duda, reiterated his opposition to the plan.

Meanwhile, the UN said at least 850,000 people are expected to cross the Mediterranean seeking refuge in Europe this year and next, as the UN refugee agency UNHCR called for more cohesive asylum policies.

As migrants continued to enter Germany yesterday from Hungary, Germany’s vice-chancellor Sigmar Gabriel said the country could accept up to 500,000 migrants a year for a number of years. The EU’s largest member state is expected to accept 800,000 refugees this year alone.

Lincoln Project rejects threat over Kushner and Ivanka billboards 20:11
Coronavirus: Italy and Spain introduce sweeping new restrictions 19:45
Belarusian opposition calls for national strike to oust Lukashenko 18:54
Coney Barrett likely to be voted to US supreme court on Monday 18:49
Effectiveness of Covid-19 vaccine could be known before end of year – Fauci 16:23