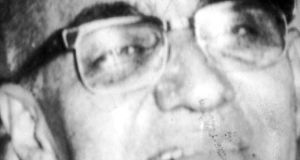 Archbishop Oscar Romero: seen by many as a martyr, he was assassinated after asking El Salvadorean soldiers to obey God’s law

has approved the beatification process of the late archbishop of El Salvador Oscar Romero. Gunned down in a small hospital chapel in San Salvador as he said Mass in March 1980, Archbishop Romero has always been a controversial figure.

For many, he was a true Christian martyr, someone who was killed both because of his solidarity with the poor and because of his regular denunciation of human rights abuses by the El Salvador government.

In a sermon the day before he was assassinated, Archbishop Romero had called on Salvadorean soldiers to obey God’s law and to stop implementing government repression and violation of basic human rights.


Assassination squad
It has long been believed that he was killed by a right-wing death squad, led by Salvadorean Maj Roberto D’Aubuisson.

In March 2010, at a ceremony marking the 30th anniversary of Romero’s death, the Salvadorean president Mauricio Funes offered a state apology for the assassination saying that the killers had acted with “. . . the protection, collaboration and participation of state agents”.


Liberation theology
Even though many in Latin America immediately perceived Romero as a hero and a saint, the church has been rather slow to promote his cause, which has been with the Congregation for the Causes of Saints since 1996.

Commentators have always believed that this reluctance was prompted by the extreme conservatism of both John Paul II and Benedict XVI, who felt that Romero had been too close to the Latin-American liberation theology movement.

There has also been doubt as to whether his death meets the classic martyrdom test of being killed in odium fidei (in hatred of the faith).

News of the impending beatification of Archbishop Romero came last weekend via Archbishop Vincenzo Paglia, who is both the head of the Pontifical Council for the Family and the postulator for the Romero sainthood cause.

On a less controversial note, the Congregation for the Causes of Saints also indicated this week that it has “recognised” a miracle attributed to the Blessed John Paul II.

This indication almost certainly means that the late pope will shortly be canonised, perhaps in October this year.