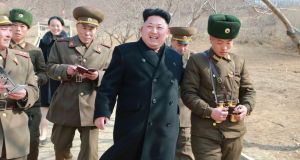 North Korean leader Kim Jong-un. The leaders in Moscow and Pyongyang appear to have much in the way of common cause. Photograph: Reuters

Russia and North Korea have announced that they will deepen economic and political ties under the banner of a “year of friendship” – a development that could further complicate the West’s attempts to deal with an increasingly belligerent Vladimir Putin and Kim Jong-un’s recalcitrant regime in Pyongyang.

The prospect of closer co-operation between Mr Putin’s Kremlin and a pariah state with realistic nuclear ambitions will dismay the US, Britain and other countries hoping to pressure Pyongyang into ditching its ambitions to become a nuclear power and to dissuade Russia from fuelling the war in Ukraine.

North Korean state media said the two countries had agreed to make 2015 a “year of friendship” to mark the 70th anniversary of “Korea’s liberation and the victory in the great Patriotic War in Russia” – references to the defeats of Japan and Nazi Germany in 1945.

KCNA said the countries would “develop the bilateral relations on to a new higher stage in various fields, including politics, economy and culture under a mutual agreement”. The Russian foreign ministry said the agreement was designed to elevate ties “in the political, economic, humanitarian and other areas to a new level”.

The trip would be Mr Kim’s first outside North Korea since he became leader of the regime following the death of his father, Kim Jong-il, in late 2011. The older Kim visited Russia in August 2011 in his armoured train for a meeting with then Russian president Dmitry Medvedev.

The friendship agreement was announced on the same day that officials in Berlin said the German chancellor, Angela Merkel, would not attend the ceremony in Moscow – a snub believed to be in retaliation for Russia’s annexation of Crimea and its support for separatists in Ukraine.

The shift in North Korea’s diplomatic focus towards Russia has been accelerated by tensions with traditional ally China. Beijing barely disguised its irritation with Mr Kim after he ordered North Korea’s third nuclear test in 2013 and the execution later that year of his uncle, Jang Song-thaek, who had been instrumental in forging closer co-operation with Beijing. Chinese president Xi Jinping has yet to meet Mr Kimthough he has met South Korea’s president, Park Geun-hye, several times.

In an apparent attempt to counter Russian influence, China has approved increased co-operation with North Korea along their border and indicated it would be willing to hold a bilateral summit.

Mr Putin may welcome the international opprobrium that would follow a public appearance alongside Mr Kim in Moscow this spring. North Korea, meanwhile, stands to gain financially and militarily from closer ties with Russia.

It remains to be seen how a closer Putin-Kim relationship will affect international attempts to end the North’s nuclear weapons programme. Talks involving North Korea, Russia, the US, China, South Korea and Japan to reach a nuclear deal have been stalled since 2009. – (Guardian service)