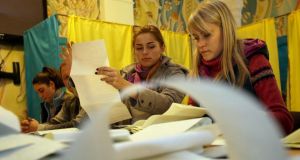 With almost one-third of votes counted, the People’s Front of prime minister Arseniy Yatsenyuk had 21.7 per cent, a whisker ahead of the eponymous party of president Petro Poroshenko. In third place was the new Self-Reliance party, led by the strongly pro-EU mayor of the city of Lviv, which is close to the Polish border.

“In the shortest time we will form a coalition, so that the new government and parliament can effectively conduct reforms that are essential for the country,” Mr Yatsenyuk said.

“The base for the new coalition will be consensus about the association agreement with the European Union. This should be the main coalition agreement.”

Thanking people who voted for him, Mr Yatsenyuk added: “There are tough times ahead of us, but together we will overcome all difficulties.”

The revolution that ousted Mr Yanukovich last February started almost three months earlier, when he rejected the historic trade and political pact with the EU in favour of closer ties with, and financial help from, Russia.

In the tumultuous months that followed, Moscow annexed Crimea from Ukraine, and backed a separatist insurgency in eastern Donetsk and Luhansk regions that has killed more than 3,600 people and displaced about one million more.

In the partial vote count, the Opposition Bloc group that is now home to many old allies of Yanukovich had almost 10 per cent, taking most of its support from largely Russian-speaking southern and eastern parts of the country.

With voting banned in Crimea and rebel-held areas of Luhansk and Donetsk provinces, about five million Ukrainians were not able to cast their ballots, and 27 of the 450 seats in parliament will remain empty.

The other parties expected to scrape over the five per cent threshold to enter parliament are the ultra-nationalist Freedom party, and the Fatherland party of former premier Yulia Tymoshenko, whose influence has declined dramatically.

Half the seats in parliament will be filled proportionally according to party lists, and the other half by winners of single-mandate constituency contests. The constituency races tend to be dominated by representatives of local business and political elites, and are often subject to disputes and claims of dirty tricks.

Mr Poroshenko and Mr Yatsenyuk complained before the vote that the old parliament had blocked key reforms since Mr Yanukovich fled, and the new chamber will include former activists, journalists and military men who have fought in the east.

On election day, Mr Poroshenko urged Ukrainians to back parties that would help him push through anti-corruption measures, stabilise the state’s finances with western help and resolve the conflict in Donetsk and Luhansk regions.

Relations with Russia still dominate Ukraine’s political landscape, and Mr Poroshenko and the new government will not only seek to bring peace to the east, but urgently secure a new gas contract with Moscow to avert possible winter shortages.

“The balance of power that is now emerging could allow the Ukrainian leadership to seriously resolve the root problems of its society,” he said.

Mr Karasin also urged the new government to “establish an inclusive dialogue with the whole society, and enter direct contact with representatives of the regions and seek a diplomatic solution to problems that Kiev’s actions have caused.”