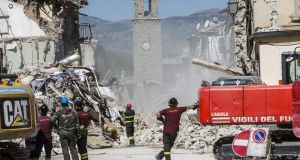 Members of the Italian fire brigades operate near civic tower, in the earthquake-stricken town of Amatrice, on Monday. Photograph: Massimo Percossi/EPA

Paddy Agnew in Rome Faced with a citizens’ protest in the earthquake-hit town of Amatrice, Italian prime minister Matteo Renzi on Monday intervened to insist that Tuesday’s mass funeral should take place in Amatrice itself and not in Rieti, some 60km way.

Tempers flared as Amatrice prepared for the funeral of 78 of those who died in the town last Wednesday. Concerned about the difficulty of getting large numbers in and out of the small hilltop town, and further worried by forecasts of bad weather, the police in mid-morning opted to move the funeral venue to Rieti, which has also become the operational headquarters of the rescue operation.

This decision prompted bitter protests from relatives of the victims who argued that they wanted the funeral service for their loved ones to be held in their own town. After he had spoken with town mayor Sergio Perozzi, Mr Renzi intervened with a tweet in which he said that the funeral should take place in Amatrice “which is what the local community and the Mayor are asking for. And this is right too!”.

More than 220 of the victims died in Amatrice but Tuesday’s funerals concern only 78 dead since many bodies have not yet been identified, while some 74 families have chosen to bury their dead privately elsewhere. With the recovery work still ongoing, workers found another body under the rubble of the Hotel Roma on Monday.

At this point, the certified dead number 291, while 238 people have been pulled out of the rubble alive, with a further 2,925 having moved into the temporary tented accomodation set up around the regions of Lazio, Umbria and Le Marche.

Turning his attention to the imposing reconstruction task now facing these regions, Mr Renzi said he would be calling on the national anti-corruption authority to oversee the rebuilding. If the experience of L’Aquila seven years ago is anything to go by, that will prove no small task since an overwhelming body of evidence would suggest that organised crime won many of those rebuilding contracts.

As it is, the hand of “Cosa Nostra” may be involved in this latest tragedy, since media speculation claims that some of the firms that carried out a €600,000 reconstruction of the now collapsed Romolo Capricana primary school in Amatrice have links to the Sicilian mafia.