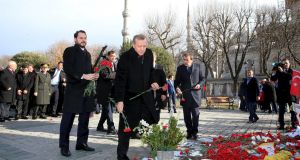 For Syrians who have fled the war for the relative safety of Turkey, life looks set to get worse. The suicide bomber who killed 10 German tourists in central Istanbul on January 12th was believed to be a 28-year-old man from northern Syria. Less than a week later, a shell fired from Syria looped over the border and hit a school in the Turkish border town of Kilis, killing one person and adding to the tension.

“Last year everything was great – all the doors were open, the official support was there and we felt we had full support from the government,” said Syrian Ahmad al-Numal from Hama, who runs a travel agency in Istanbul’s Aksaray district.

“It’s not physical harm from Turkish people we are afraid of, it’s that Turkey is starting to treat us the way Lebanon or Jordan treat us.”

But increasingly the war has fanned out into Turkey through a series of devastating Islamic State-related bomb attacks, causing the government pause. The rise in popularity of Islamic State, also known as Isis, among sections of Turkey’s youth has also added to uncertainty among Turks.

Europe, too, is contributing to the insecurity. As a result of an agreement signed by Ankara and European leaders last November, Turkey agreed to crack down on the flow of refugees entering Greece in return for more favourable visa conditions for Turks. To fulfil this condition, however, Ankara this month began stopping Syrians without visas from entering Turkey.

Violent nationalism has been on the rise in Turkey over the past year, and though directed mainly at Kurds, Syrian-owned shops near the border have also been targeted.

In a veiled warning to Syrians here, president Recep Tayyip Erdogan, a long-standing supporter of Syrian opposition groups, warned shortly after the Sultanahmet bombing that “those who benefit from our country while betraying it will be punished”.

Opposition politicians have, at times, used refugees as electioneering fodder by highlighting the economic damage the war has caused and by calling for Syrians to be sent back home. “We will say to them, ‘Sorry, but go back to your hometown,’” a leading opposition politician was quoted as saying last April.

A survey on public attitudes conducted prior to the Istanbul attack indicated that 70 per cent feel Syrians are damaging the economy, while 62 per cent believe Syrians are disrupting Turkey’s social order. In some ways Turks have benefited from the influx of refugees. Growing demand for accommodation and retail space has seen rents rise in cities across the southeast and in Istanbul. Cheap Syrian labour has filled the coffers of businesses involved in agriculture, manufacturing and tourism.

Yet the bigger picture suggests the war has been mostly damaging to Turkey. The fallout from Turkey’s shooting down of a Russian military jet last November has cost the country billions of euro in Russian tourism revenue and led to further finger-pointing about Syria’s growing influence in domestic affairs.

For Syrians, the recent bombings have led to fears that the slightest suspicion or rumour of wrongdoing on their behalf may see a repeat of incidents in August 2014 when groups of locals in west Istanbul armed with knives and machetes destroyed Syrian-owned cars and business, and injured several Syrians.

Turkey’s decision to stop taking Syrians who haven’t obtained visas is, in the eyes of travel agent Ahmad al-Numal, a devastating step. “Turkey has been the only one to help Syrians. Jordan, Lebanon, other Arab countries and the West have turned their back on us,” he said. “If we lose Turkey’s support there will be nowhere else to go.”