Pressure on Spain over deaths of 15 African migrants

Opposition, NGOs and EU ask why tear gas and rubber bullets were fired at Sub-Saharans trying to cross from Morocco to Ceuta 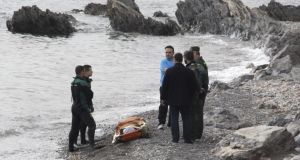 Members of the Spanish Guardia Civil stand with the body of an immigrant on a beach in the Spanish city Ceuta, north Africa, on Saturday. Photograph: EPA/Reduan

Spain’s government is under mounting pressure to explain the authorities’ handling of an incident earlier this month when at least 15 African migrants died while trying to cross the border between Morocco and the Spanish city of Ceuta.

The political opposition, NGOs and the European Commission have all demanded an explanation as to why Spanish civil guards fired rubber bullets and tear gas into the water near where the migrants died, apparently from drowning.

In the early hours of February 6th, an estimated 250 sub- Saharan Africans attempted to reach Ceuta, on the north African coast, from Morocco. They first tried to scale the six-metre-high fence that runs along the border, but when Moroccan soldiers spotted them, a group of several dozen migrants entered the sea and tried to swim round the fence in order to reach Spanish soil.


Death toll
Several of them died while in the water and on Saturday, the Spanish police reported that another body had been recovered, bringing the death toll to 15.

According to some of the migrants, Spanish civil guards fired tear gas at them as they struggled to reach the shore.

“The civil guards fired tear gas into the water where we were,” one Nigerian man told El País newspaper. “A lot of my friends fainted when they inhaled it. The Spanish killed them.”

Another claimed that the civil guards had fired rubber bullets directly at the migrants.

“Those who were hurt report that the violence on the part of the Spanish was worse than that of the Moroccan police, that the [civil guards] fired the rubber bullets and tear gas at them and at their buoyancy aids and that this killed them,” said the NGO Caminando Fronteras, which works to help African migrants.

The head of the Civil Guard, Arsenio Fernández de Mesa, initially denied that rounds were fired into the water. However, last Thursday, interior minister Jorge Fernández Díaz told Congress that they were, although not at the migrants.

Daniel Conesa, spokesman for the local government of Melilla, Spain’s other territory on the north African coast, offered a prickly response in defence of the neighbouring city.

“It’s very easy to talk from the comfort of the north, and not to understand the problems we’re having in the south, but these problems in the south are also the problems of Sweden, of this lady commissioner and the entire EU,” he said.

The opposition Socialist party is also piling pressure on the government, calling for the Civil Guard to release complete video footage of the incident, rather than a short, edited clip that was initially presented. The Ceuta state attorney’s office has made a similar request and has asked a local court to investigate the deaths.

According to Socialist Antonio Hernando, a complete video could be key in terms of giving a reliable version of events.

Today, the opposition has called for the interior minister to face a no-confidence vote over his management of the case, although the governing Popular Party’s majority is likely to ensure he survives.

While the controversy rages over how the Spanish authorities handled the situation, attempts by migrants to get into Spain via its two African territories show no signs of slowing.

In addition, the Spanish police have reported that around 30,000 migrants are currently in Morocco waiting to enter Spain, either via the Melilla and Ceuta fences, by boat, or hidden in vehicles making the crossing by ferry.