Those from outside Muslim world ‘like seeing us, our children, die’, says president 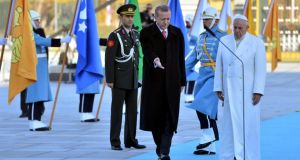 Pope Francis and Turkey’s President Tayyip Erdogan in Ankara: Any illusions about the difficulties of Muslim-Christian, East-West dialogue the pontiff might have had were dispelled by a remarkable statement by the Turkish leader. Photograph: Murat Cetinmuhurdar/Reuters

If Pope Francis had any illusions about the difficulties of Muslim-Christian, East-West dialogue, they would have been dispelled by a remarkable statement this week from Turkish president Recep Erdogan. On the eve of the pope’s current three-day trip to Turkey, the president said:

“I speak clearly. Those who come from outside [the Muslim world] only like the oil, gold, diamonds, cheap workforce, conflicts and disputes of the lands of Islam. Believe me, they do not like us . . . They like seeing us, our children die. How long we will continue to tolerate this?”

He made these comments, widely reported in yesterday’s English language, Turkish media, in an address to the Standing Committee for Economic and Commercial Co-operation of the Organisation of Islamic Co-operation.

Pope Francis made no reference to the president’s comments when he was received yesterday by him at his controversial 1,000-room new palace. Rather, he expressed his delight at visiting a country which is “a natural bridge between two continents and diverse cultures” and a country precious to Christians as “the birthplace of Saint Paul”.

The pope also praised the generosity of Turkey for having taken in more than two million Syrian and other refugees, adding that the international community had a “moral obligation” to assist Turkey in caring for these refugees. Furthermore, he lamented the fact that Christian, Yazidis and other “minorities” had been the victims of “grave persecutions”.

“In reaffirming that it is licit, while always respecting international law, to stop an unjust aggressor, I wish to reiterate, moreover, that the problem cannot be resolved solely through a military response . . .”.

In response, President Erdogan pointed an accusatory finger at Syrian president Bashar al-Assad, whom he accused of conducting “state terrorism” in his own country.

He also argued that the economically downtrodden “masses” of the Islamic world, “pushed into poverty”, had been exploited by extremist groups such as Islamic State and Boko Haram.

The pope had begun his three day visit by visiting the mausoleum of Mustafa Kemal Ataturk, the founder of the Turkish Republic. Later, he also met Mehmet Gormez, head of Turkey’s religious affairs directorate, the state body which controls Turkish Islam, by employing 60,000 Imams countrywide. Here he called on Christians and Muslims to recognise and develop their “common spiritual heritage”.

“The world expects those who claim to adore God to be men and women of peace who are capable of living as brothers and sisters, regardless of ethnic, religious, cultural or ideological differences . . .”

Pope Francis continues his voyage of inter-religious dialogue this morning when he visits two of the most famous religious sites in the world, namely the Ayasofya or Santa Sofia museum and the Sultanahmet or “Blue” Mosque, both in Istanbul. The Ayasofya served as an Orthodox patriarchal basilica for more than 1,000 years until the then Constantinople was conquered by the Ottomans in 1453, when it was turned into a mosque.

Closed by Ataturk in 1931 and then reopened as a museum, the Ayasofya remains a bone of contention, with many in Turkey’s 2,000 strong Greek Orthodox community worried it might yet be reconverted back to a mosque.

The pope’s visit also takes in Mass at the Cathedral of the Holy Spirit in Istanbul, and an ecumenical celebration of the feast day of St Andrew, patron saint of the Orthodox Church.