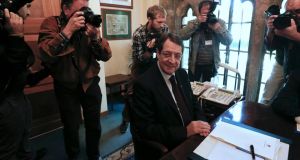 The Cypriot parliament is meeting tonight to vote on a yet to be finalised Plan B to stave off bankruptcy and economic disaster.

President Nicos Anastasiades held meetings yesterday with political party leaders, a technical team from the troika, and cabinet ministers to consider elements of a new proposal for raising the €5.8 billion needed to obtain the EU bailout of €10 billion.

On Tuesday, all 56 lawmakers sank legislation that would have imposed levies of up to 9.9 per cent on all bank deposits above €20,000.

Since this was the first time a bailout plan was rejected by the legislature of an applicant country, there has been tough talk from Eu ropean politicians.


Domestic sources
Plan B would raise money from domestic sources, including pension funds and branches of foreign banks operating in Cyprus.

Archbishop Chrysostomos II, head of the Greek Orthodox Church in Cyprus, yesterday offered to mortgage the assets of the church and invest in government bonds. These include the Hellenic Bank, which has €2.5 billion in hand, a winery and brewery, hotels and extensive property holdings.

Another option being discussed is the consolidation of the faltering Bank of Cyprus and Laiki (Popular) Bank and the sale to Greek banks of their Greek branches and those of the Hellenic Bank. This would relieve the parent banks of the burden of operating 300 branches.

There is some hope Russia might agree to a five-year extension until 2021 on a €2.5 billion loan granted in 2011, and to lend an additional €5 billion. However, a fresh loan could be rejected by the European Commission, which insists an alternative scenario must not involve taking on more debt than Cyprus can afford. ATMs have been dispensing limited amounts of cash and shops accept credit and debit cards from customers making purchases but people without cards are hit hard by the closure of the banks, which are likely to remain shut until next Tuesday even if parliament approves a deal acceptable to the Troika. To prevent a massive capital outflow when banks reopen, the government is said to be considering controls on external transfers.

However, this could panic both Cypriot and foreign customers.


MoneyGram continues
It is estimated that €2 billion had been taken out of the country before the bailout crisis erupted. On the positive side, MoneyGram continues normal transfers at post offices while the healthy Cooperative Bank, which has branches in villages as well as cities, has declared that its cash machines are well stocked and that it will compensate depositors for losses from levies on savings with shares with a reasonable amount of interest.